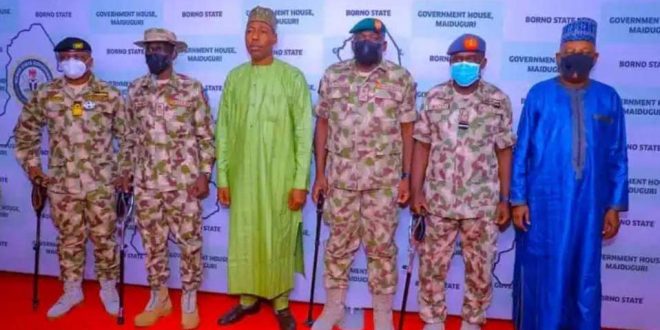 Borno Governor, Professor Babagana Umara Zulum has commended the Nigerian military over recent gains recorded against Boko Haram’s fighters in Gwoza and the road leading to the northern part of the State.

In a statement issued on Monday, Zulum’s spokesman, Malam Isa Gusau said the Governor authorized the public commendation, in keeping up with his objective assessment of the military.

“The Governor commends the Nigerian military such as troops of the 26 Brigade in Gwoza for eliminating and injuring scores of insurgents on Sunday and recovering their weapons.

Zulum also commends troops of sector three of Operation Lafiya Dole for eliminating scores of insurgents and recovering their weapons on Friday, along Monguno – Gajiram road during an ambush by the terror group at Jigalta village.

The troops which were accompanying a resettlement committee led by the State’s Attorney General and Commissioner of Justice, displayed courage, patriotism and professionalism during almost one hour encounter.

The Governor was impressed that despite three soldiers sustaining minor injuries, the troops chased the fleeing insurgents to the bush, neutralized all locations and proceeded with their escort duty.

Zulum also lauds troops of the 112 Battalion in Mafa
for recovering a truck loaded with valuable items which insurgents seized from citizens along Monguno – Gajiram road.

The troops, during their patrol between Mafa and Dikwa, on Saturday, intercepted the truck which hoped to make supplies to insurgents in Sambisa through night movements. The 112 battalion again recovered weapons and motorcycles from insurgents.

All of these are strong indications of patriotism, courage and commitment which we need to acknowledge in order to strengthen the determination to build enduring peace in Borno” Zulum said.