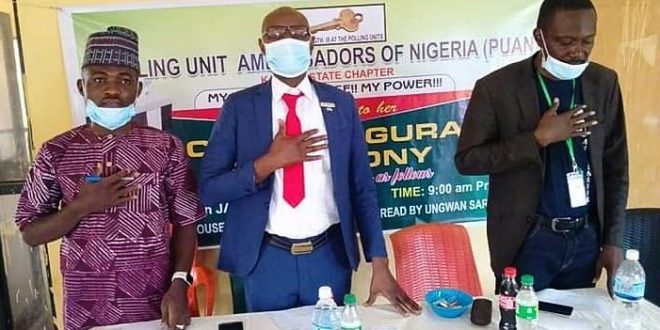 PUAN Inaugurate Kaduna Chapter Executive
By Usman Nasidi; Kaduna.
In an effort to see free, fair and credible elections in Nigeria that is why the Polling Units Ambassadors of Nigeria was in place  (PUAN) had inaugurated and sworn-in Kaduna State chapter executive to officially represent the organization at the state and zonal level.
The Non Governmental Organization (PUAN) is aimed at monitoring and sensitizing electoral act and electorate is saddled with the responsibility of taking a pragmatic political revolutionary step towards building a polling unit Electoral structure at each of the 119,973 polling units across the country.
Speaking at the event, the Ambassador General of (PUAN), Amb. Capt. Dabas Suleiman explains that the organized polling unit electoral structure (PUES) by PUAN is designed with the goal to discourage all forms of electoral malpractices at polling unit, chase out unproductive and retrogressive politicians and encourage massive participation of polling unit community in enthroning good democratic governance.
He added that polling unit community has been identified as a vital electoral structure for the survival of any democracy and the organization is to encourage the electorate not only to vote for their preferred candidate, but to also monitor and evaluate the activities of the elected officials for the period of their political tenure in office.
He said “the core mandate of the polling unit Ambassadors of Nigeria (PUAN) is to educate, sensitize and mobilize eligible voters to see their PVCs as their power to enthrone good governance, thereby making wise and informed electoral choices.”
Amb. Suleiman also disclosed that the organization came with a 25 year mandate that will change the Nigerian political narrative, by extension Africa; for the greater good of the people by the idea to organize and ensure generation of eligible voters who are conscious of their electoral rights, to raise polling unit communities that would vote with a focus and impress the democratic principle that resides power with the people by the slogan My Vote, My Choice, and My Power.
Furthermore, he explained that PUAN is not a partisan organization and it’s an Africa project that pilots a test case in Nigeria while had it ambassadors mobilized all over the 119,973 polling units in Nigeria with a solid structure at the national, zonal, state, area and ward levels to observe and report live electoral proceedings at the 2019 general elections and beyond, post elections assignment nationwide and by extension already working towards 2023 general elections.
“PUAN is a registered organization with the CAC and INEC respectively, while a self sponsored organization, it’s aspiring to become a house hold name in Nigeria that will be known to have brought a political revolution through grassroots awareness and it remain committed to it noble course.” he says.
Meanwhile in his presentation, the Secretary General Amb. Prince Osa Osaghae narrated that through their sensitization and mobilization strategy at the polling unit communities, the electorate will come to understand how their votes become a viable tool in a democratic system of governance to elect leaders that will better the welfare and livelihood of their constituencies.
And according to him, the electorates will also discover that elected leaders under democratic system are meant to serve and by all means be accountable to the elaborates.
He said “the electorates will be more united than ever in their decision to corporately effect a change when an elected leader performs in office below expectation.”
” The communities are also sensitized to know that every political elected officer must be appraised, and their works evaluated and monitored in conformity with their political manifesto’s and campaign promises.”
“If on the contrary the elected officer does not measure up to the expectation, the people at the polling unit communities will be mobilized in one accord to effect a change and establish the fact that power resides permanently with the people.” – says Amb. Prince Osa.
In his remarks on behalf of the newly sworn-in state executive members, the Kaduna State Ambassador Umar Umar Mustapha appreciates efforts made by the national executives leaders to ensure they made it down to grace the occasion, and also expressed gratitude to the state Exco’s for making all efforts that leads to the success of the inauguration.
Share