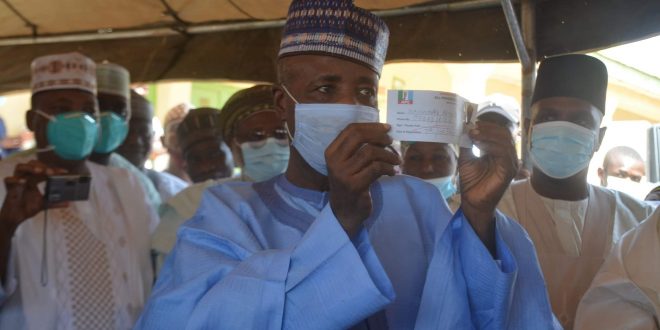 The revalidation marked the commencement of the nationwide registration and revalidation exerise of the party which is billed to begin on Tuesday, February 9,2021.

Wamakko was registered by the Secretary of the National Registration and Revalidation Committee deployed to the state , from the National Headquarters the of the party, Alhaji Muazu Kabiru Ardo.

The former Governor of the state was registered at his Gidan Ja’oje , Polling Unit, 003 Wamakko Ward, Wamakko Local Government of Sokoto State and was given the registration slip with serial number, 001.

Speaking at the historic event, Wamakko expressed happiness with the honour anr privilege to have been the first to be resgitered in Sokoto State.

He said that , the Committee handling the exercise has been doing a very good job, as well as well commended the Governor Mai Mala Buni-led National Caretaker Committee and the state leadership of the party for living above board .

Wamakko assured that, himself and all the stakeholders of the party will do their utimate best, to ensure the success of the exerise.

Wamakko also expressed optimism that,APC will reclaim it’s stolen mandate in the state in 2023,while the party will sweep the polls at all levels ,in 2023, In Sha Allahu.

” APC is the party to beat in the state and in Nigeria and it has now become part of the blood of the people of Sokoto State .

” Nigerians are also proud and appreciative of the good works our National Leader, President Muhammadu Buhari is doing for the nation,” Wamakko, added .

Also speaking, the Chairman of the National Membership Registration and Revalidation Exercise Committee deployed to Sokoto State, Professor Saleh Galadima Kanam, averred that, the exerise was crucial in repositioning the party, towards the 2023 General Polls .

Kanam noted that, APC in the state ,ably led by Wamakko, is very strong, united and focussed, even as he expressed optimism that, the exerise will be hitchfree and successful.

The State Caretaker Chairman of the party, Alhaji Isa Sadiq Achida,the leaders, members and all the stakeholders will leave no stone unturned in ensuring the success of the all-important exercise.

Achida further stated that, the people of the state were eagerly waiting for the exerise, saying ,” APC in Sokoto State is one and indivisible.”