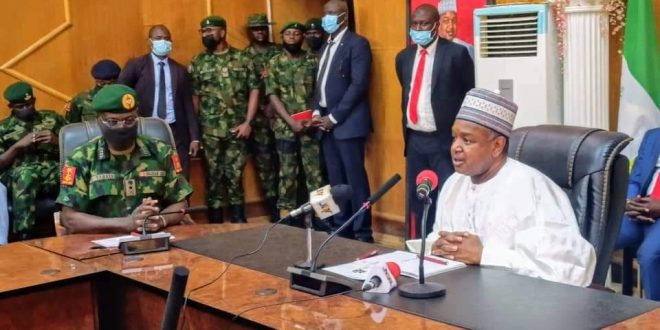 Kebbi State Governor, Senator Abubakar Atiku Bagudu has commended the Nigerian Army for its relentless efforts in securing lives and property of the citizenry as well as protecting Nigeria’s territorial integrity. 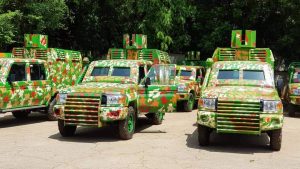 In a statement Signed by YAHAYA SARKI,
Special Adviser (SA) Media to Kebbi State Governor made available to journalists revealed that

The governor said inspite the challeges being faced by the Nigerian military, they are doing a wonderful job in providing security to the citizens 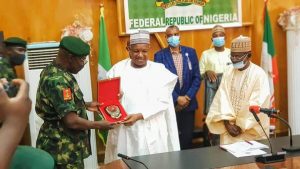 The Chairman of the APC Governors’ Forum was speaking at Government House, Birnin Kebbi, when the Chief of Army Staff, Lieutenant-General Faruk Yahaya, paid him a courtesy visit this Tuesday.

He said over ninety per cent of Nigeria’s territory is peaceful due to the relentless efforts of the soldiers and other Nigerian security services.

Bagudu acknowledged the patriotic and relentless efforts of the Armed Forces and other security agencies, often with supreme sacrifice in the defence of the fatherland .

‘ let me use this opportunity to express our sympathy especially on the loss of lives of Nigerian soldiers and other innocent souls ‘, he averred. 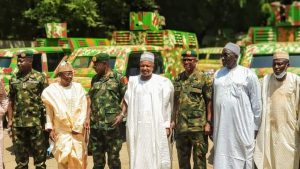 The Kebbi State Governor noted that no nation of the world was 100 per cent without challeges, recalling how even US had to abruptly leave Afghanistan after spending billions of dollars, in a span of 20 years.

Bagudu vowed to continue to provide the needed support, goodwill and morale booster to the military and other security agencies .
This, he noted is to serve as an encouragement for them to continue to selflessly render their direly needed services.

He also opined that peace has returned to troubled areas in Kebbi recalling how Danko Wasagu was bedivilled by insecurity in 2015 and how his administration has succeeded in securing peace in the area.

” Peace has also returned to the hitherto troubled areas of Kebbi State especially Danko Wasagu local government, just as same feat has been recorded in the North East.

” I can vividly remember when some years back when we trekked for over eleven kilometres into farmlands in that hitherto troubled area, with view to celebrating the return of peace.

” We have 255 political wards in Kebbi State across the 21 local governments and in all of them massive agricultural activities were going on in full force .

” Credit must be given to my late Security Adviser, retired Maj.-Gen. Muhammad Dan Hanne. and my deputy, retired Col. Samaila Yombe , who literally relocated to Danko Wasagu that time.”, he averred.

Earlier, the Chief of Army Staff,Lieutenant-General Faruk Yahaya had told Bagudu that the visit was to pay respect and homage to the Governor , saying, ” we are getting feedbacks for everything you are doing to us , our troops and other security agencies.

“The governor has sustained his commendable goodwill to us even during the most trying times .

” He has been very consistent in his support . The governor was always calm, understanding, providing support and encouraging us at even the toughest times.

” We are thanking you again for your invaluable support to our troops and you are always appreciating our efforts.”

Yahaya however urged the Governor not to relent in this direction.

He added: ” I know you will not relent , as even when we don’t ask you have provided.

” Even when we have not seen, you have called to give input and guidance.”