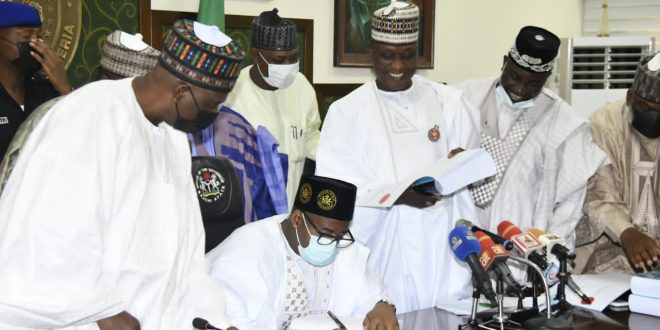 : Appreciates Assembly for timely passage
Governor Bala Abdulkadir Mohammed of Bauchi State on Friday signed into law, the sum of N197,475,607,143.85 as the 2022 budget estimate.
Speaking while assenting the 2022 appropriation bill, the governor thanked the Honourable Speaker, Principal Officers and members of the house for the speedy passage of the budget.
Governor Bala Mohammed said the 2022 budget has been derived from the State Medium Term Plan 2021-2025 in which the state government would soon roll it out.
He said the Plan which aligns with the overall national and sub-national planning perspectives, has set out his administration’s developmental objectives and defined it key priorities which the state hope to achieve through the budget process.
The governor said the adjustment of 2,120,000,000.00 in the budget made by the State Assembly to the proposal submitted was done to support the move by his administration for the financial autonomy of the legislature and the judiciary.
According to him, the development also aligns with the state government’s desire and commitment towards ensuring the independence of the two arms of government.
“We give glory to Almighty Allah for today’s occasion which concludes the chain of processes within the Budget cycle culminating into the State’s 2022 Appropriation Law which approves the 2022 Budget in the sum of N197,475,607,143.85 for which my assent is sought.”
The governor reiterated that, the focus of the budget will be the completion of the numerous developmental projects embarked upon by his administration and assured that his commitment towards high level of performance will not be in doubt.
Governor Bala Mohammed said the state government will ensure that, a robust framework for implementation is put in place and will hold officials responsible for any shortcoming. 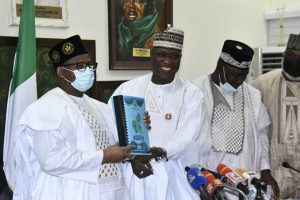 “It is my hope however, that everyone involved in the implementation of the budget will equally be driven by the spirit of patriotism and commitment to ensure success in the process.”
On his part, the Speaker of the State House of Assembly, Abubakar Y Sulaiman said the house increased the amount of the budget from over 195 billion to over 197 billion naira for the best interest of the state.
The Speaker said the house is satisfied with the level of implementation of the 2021 budget by the state government.
Delivering a vote of thanks , the State Commissioner for Budget and Economic Planning, Aminu Hammayo assured the governor and the people of the state that the performance of the 2022 will be better than that of  2021 through initiating robust framework for implementation.
Share