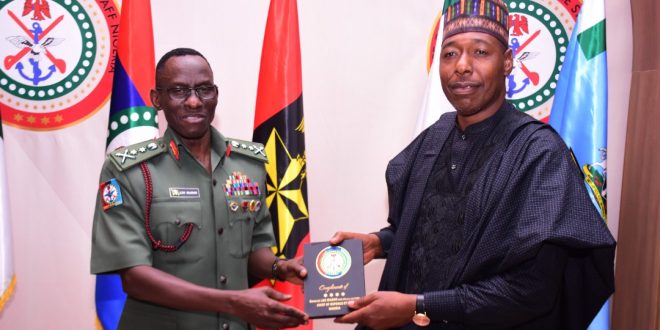 As part of his ongoing multi-stakeholders’ consultations on the massive surrender by Boko Haram insurgents in different parts of Borno State, Governor Babagana Umara Zulum on Monday visited the Chief of Defence Staff, General Lucky Irabor, in Abuja.

The meeting, which was held behind closed doors, was in furtherance of Zulum’s resolve to widely consult security and Borno stakeholders towards developing a framework that would.address concerns raised over the surrender by members of the Boko Haram/ISWAP through the military’s ‘Operation Safe Corridor’ deployed as a psychological warfare to weaken the ranks of the terrorists. 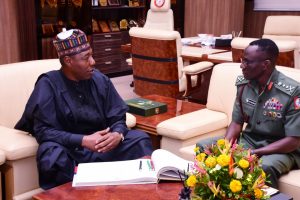 Governor Zulum arrived Abuja from Maiduguri same day and headed to the Office of the Chief of Defence.

The governor is scheduled to hold series of other consultations.

It would be recalled that Zulum had, on Saturday during his visit to Bama and Gwoza, addressed military commanders and community leaders. 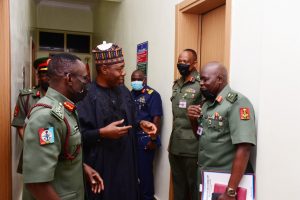 He had then disclosed plans to engage in a high-level consultation with President Muhammadu Buhari, the service chiefs and the resident security heads, traditional rulers, elders and religious leaders, national and state assembly members, academics, other stakeholders and victims of insurgents’ attacks with a view to addressing what he described as a difficult situation. 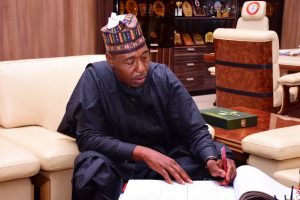 The governor noted that though the surrender by thousands of insurgents provides a significant opportunity to end the 12 years of war, there were concerns that needed to be addressed. The concerns, bother on the feelings of victims as well as the confidence of citizens in the event repentant insurgents are to be reintegrated.