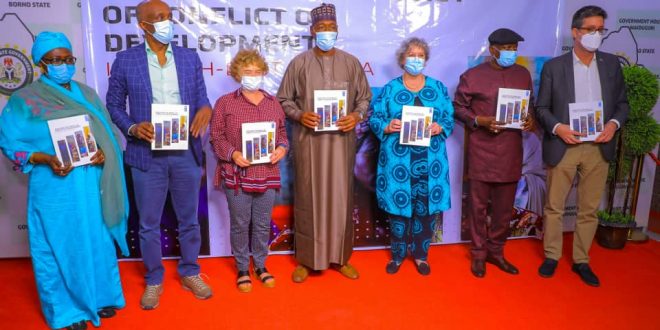 … Ahead of tour, Zulum passes night in Banki

Borno and the United Nations (UN) hosted a high-level delegation of key partners during a one-day mission to Borno State on Wednesday to highlight humanitarian and development priorities in north-east Nigeria. Delegates from Canada, the European Union, France, Germany, Norway, Switzerland, the United Kingdom and the United States of America as well as the World Bank Group and International Monetary Fund (IMF) visited key locations and were provided an overview of the coordination and operational challenges related to humanitarian and development programming in the region. The objective of the high-level visit was to underscore development deficits in the three States of Borno, Adamawa and Yobe, and to put a spotlight on humanitarian needs, particularly with regards to access for service delivery, security, and the rapidly escalating food insecurity.

The high-level delegation discussed the ongoing insecurity in the region, and how the protracted conflict in Nigeria has affected the Lake Chad Region, including its neighbouring countries of Cameroon, Niger and Chad for over 10 years. As a result, over 3.2 million individuals are displaced, with 4.4 million food insecure people at crisis and emergency levels and millions of civilians subjected to extreme hardships. In north-east Nigeria alone, 13.1 million people live in areas affected by conflict, out of whom 8.7 million are in need of immediate assistance. The security situation remains highly volatile with non-state armed groups (NSAGs) continuing to target communities as well as humanitarians, including in areas that were previously considered secure. 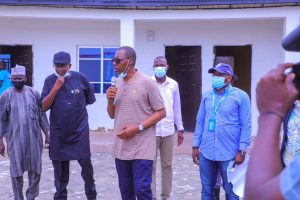 Led by the Governor of Borno State, Prof. Babagana Zulum with support from the UN, the mission also provided an opportunity to advocate for humanitarian and development efforts, emphasize the protection of civilians in the context of a challenging and insecure operating environment, and highlighted operational efforts in restoring the dignity of conflict-impacted communities through a people-centered approach paired with durable solutions. In addition, the delegation discussed the urgent need to scale-up initiatives around food security, nutrition, protection and livelihoods for impacted populations in desperate need.

“Here in the Lake Chad Region, we face one of the most severe humanitarian emergencies in the world. The uncertainty arising from the conflict are hampering normal life making dependency on humanitarian assistance a necessity but an unwarranted norm” said Governor of Borno State, Prof. Babagana Zulum. “While we thank our committed international stakeholders for their strong partnership and generous contributions to the stabilization of the north-east, I urge for continued support from all partners to continue to join us, whole heartedly, in taking bold steps to promote development in the region”. 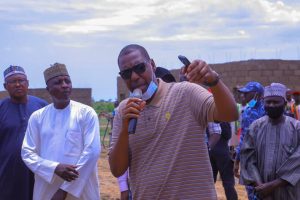 Ahead of the Banki visit, host Governor Zulum travelled from Maiduguri on Tuesday and passed the night in Banki.

Joined in Banki by other delegates on Wednesday, Zulum and his high-level visitors met with key partners and beneficiaries from the United Nations Development Programme (UNDP) Regional Stabilization Facility (RSF), which uses a community level approach to enhance physical security and access to justice, rehabilitate essential infrastructure and basic service delivery as well as revitalize the local economy to help communities recovering from conflict build back better.

“On behalf of the UN system, I wish to extend a deep sense of appreciation to our international partners for their continued support to the government and people of the BAY states as well as the Lake Chad region” said Mr. Edward Kallon, Resident Humanitarian Coordinator, United Nations Nigeria. “The mission today has shown the power in combining development and humanitarian efforts, and it is clear that we must accelerate these contributions and find innovative ways to end this decade-long conflict if we are to meet our global, national and state goals to build back stronger”.

Delegates were able to visit the Banki IDP camp and the newly constructed police station and customs office on the border of Cameroon to learn how development efforts are increasing security and supporting the return of normalcy back in the community. In addition, delegates were able to have a dialogue with the community led Stabilization Committee and returnee representatives to hear first-hand from the community about their needs and challenges.

In Maiduguri, delegates had the opportunity to meet with members of the displaced population, and key humanitarian actors, who lead the various sectors of response. The free-flowing discussions with the delegation were led by Deputy Humanitarian Coordinator, Vincent Lelei, and brought focus to priority concerns of the humanitarian community, as it relates to access, security, protection, freedom of movement and the potential impact of catastrophic food insecurity. During the visit the United Nations Office for the Coordination of Humanitarian Affairs (OCHA) took the delegation to Muna IDP camp and the Stadium IDP Camp, engaging with IDPs and partners who are supporting the two camps.

Delegates also met at the Governor of Borno’s office to have a dialogue with key government actors as well as participate in the launch of a new UNDP report, ‘Assessing the impact of Development in North-east Nigeria’ which looks at the impact of conflict on development in the BAY states.

“Today’s high-level visit to Borno State, including Banki, has been a great opportunity to reassert the EU and the international community support to the implementation of the Lake Chad Regional Stabilization Strategy” said Ms. Cecile Tassin-Pelzer, Head of Cooperation of the EU delegation to Nigeria and ECOWAS. “To date, the EU and its member states have committed around 56 million euros through the UNDP Regional Stabilization Facility. This is a concrete illustration of Team Europe’s contribution to the stability of Nigeria and the wider region”.

As communities attempt to recover, resilience can only be built when both humanitarian and development efforts are combined through the humanitarian-development peace nexus. While root causes of the conflict are many and varied, priority must be given to address these challenges. This high-level visit provided key donors with the opportunity to gain an in-depth understanding of the urgent need for continued support to assist conflict impacted communities in north-east Nigeria recover.

“I am glad to have had the opportunity to visit communities in Borno and meet with Governor Zulum to understand the situation on the ground. It is vital we ensure the safety and dignity of displaced people, act now to tackle worsening food insecurity, and support stabilisation efforts”, said British High Commissioner Ms. Catriona Laing. “The UK is providing a comprehensive package of support to the region, including lifesaving humanitarian aid for conflict-affected people and support for the Regional Stabilisation Facility”.

“We are grateful to our partners on the ground who directly implement programmes made possible through U.S. humanitarian assistance totaling over $1.45 billion over the past 6 years. There is no substitute for seeing and hearing from local residents and displaced families who are finding ways to live under the most austere conditions” said U.S. Ambassador Ms. Mary Beth Leonard.

Previous Central Bank Is Out To Finance Agriculture – Ahmad Wali
Next Flooding: Zulum Out at Night to Supervise Evacuation Work