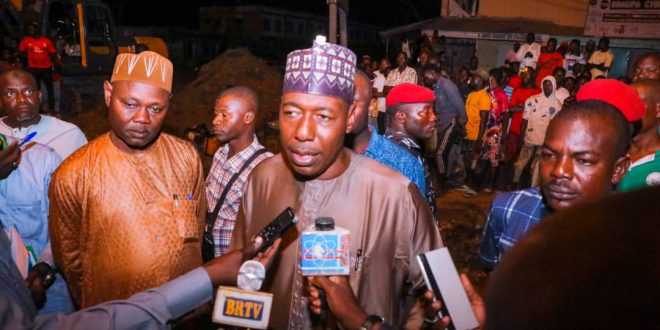 Flooding: Zulum Out at Night to Supervise Evacuation Work

On an inspection tour of the drainages, the Governor said to ensure full compliance, the state government will review existing environmental laws which include forestry and sanitation laws. 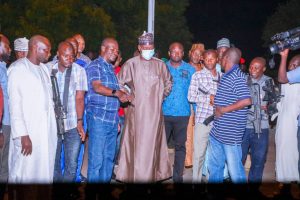 “As you can see here, we have identified some persons who built on waterways, thereby blocking the free flow of water to the channels, causing flooding every rainy season. These shops have been demolished and we have recovered the waterways”, Zulum said. 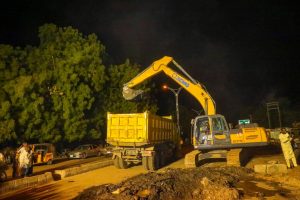 “All of us have seen what happened last year, the state capital has been experiencing serious flooding, and that is the reason government has intended this year to holistically look into the issue of flooding in the metropolis. Our major challenge is the incursion of silt into the channels, that is the reason we are de-silting it. But we have to come up with a very good master plan”, the Governor added.

The Governor commended the overseeing Commissioner for Environment and his team for their work in ensuring free passage of water in and around the state capital.

In the same vein, the Governor urged the general public to cooperate with the Ministry of Environment and the flood committee to ensure the success of the exercise.

“I urge our people to behave well, you have seen the water channel, but people have filled it up with motor tyres, even concrete slabs and other things. There is need for us to embark on public orientation, on television, radio and all mediums of communication”, he said. 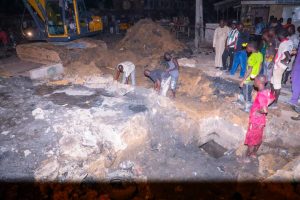 The overseeing Commissioner for Environment, Barr. Kaka Shehu Lawan, who received the Governor along post office area said hundreds of kilometres of drainages have been de-silted within the metropolis, Jere and Mafa Local Government Areas.

He stressed that post office area has been one of the flash points where flooding is experienced every year.

The commissioner assured that with the ongoing de-silting of water channels and draining work that connects to River Ngada Bul, no part of the state capital will be affected by flooding.