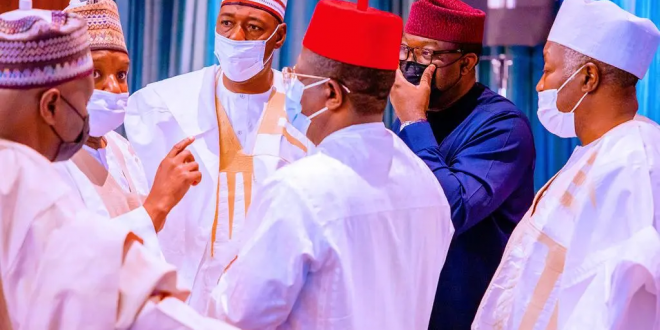 The ruling All Progressives Congress (APC) has zoned its chairmanship to the north ahead of the 2023 elections.

Governors Nasiru El-Rufai (Kaduna) and Atiku Bagudu (Kebbi), announced this while responding to Daily Trust’s question at a media briefing, which held after President Muhammadu Buhari’s meeting with governors of the ruling party.

El-Rufai said the party has agreed to swap the current vacant positions in the National Working Committee (NWC) between the Northern and Southern parts of the country ahead of March 26 national convention.

By implication, the chairmanship position, which has been held by former Governors John Odigie-Oyegun and Adams Oshiomhole of Edo State from the South will now go to the North.

El-Rufai said, “We have agreed a zoning formula for all the six geopolitical zones and essentially, we swapped. Northern zones will take positions that Southern zones had in the last eight years and vice versa.

“So, it’s a very simple, equitable and fair formula. We will now go back and consult at the zonal level, and look at the positions that are available and the process of the convention preparation will start in earnest. So by the grace of God on the 26th of March, we will have done a national convention.”

The brief meeting that took place at the Council Chambers of the Presidential Villa in Abuja were attended by Vice President Yemi Osinbajo and 19 governors, including those of Yobe, Kano, Kogi, Ekiti, Nasarawa, Kwara, Ebonyi, Jigawa, Lagos, Imo, Ogun, Borno, Niger, Gombe, Osun, Kebbi, Plateau, as well as Deputy Governor of Anambra State who left the All Progressives Grand Alliance (APGA) for the APC last year.