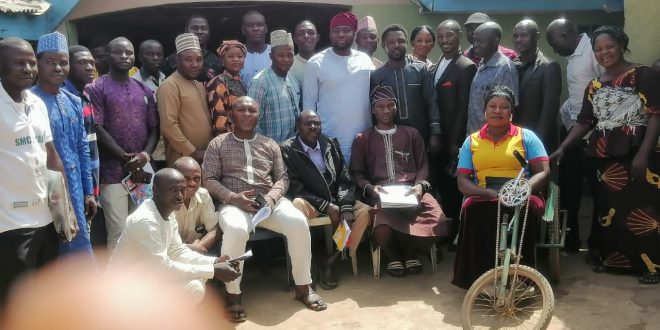 Determined to bring the youths of Sanga Local Government Area in Southern Kaduna under one umbrella in order to promote youth empowerment, infrastructural development, among others, various Socio-Cultural Development Associations and it’s affiliates body have on Saturday met in Gwantu, the headquarters of the local government and formed a Coalition for Sanga Youth Development Association.

In his welcoming address, a co-convener Mr. Johnson Ambisa highlighted the overview of the meeting, noting that the decision to form the Coalition is to have one umbrella that provide shelter for the youth in terms of youth empowerment, infrastructural development among other things.

Speaking at the meeting, Co-Convener, Yayandi Andrew Monday, called on the leaders of the coalition to avoid using religious, ethnic and political differences in the movement as it is against the mission of the coalition.

Yayandi, who is also the National Youth Leader of Numana Youth wing, said it is time for the youth to wake up and seek for their inclusion in every aspect of local and national development and not to allow themselves to be used by politicians for their selfish interest.

Another co-convener, Comr. Joel Abeku stated the needs to have the coalition at the time when the globe is revolving round the youth.

The name; Coalition for Sanga Youth Development Association was adopted with the main objectives of the coalition to foster unity among all youth development associations within Sanga LGA and beyond, to advocate for youth development and empowerment and to serve as a tenet avenue to breed Sanga future leaders with selfless mindset.

The Chairman Youth C.A.N, Mr Hassan Duniya and the representative of Hausa people, Mohammed Abubakar commended the efforts of the conveners and pledged to ensure the total support of their associations.