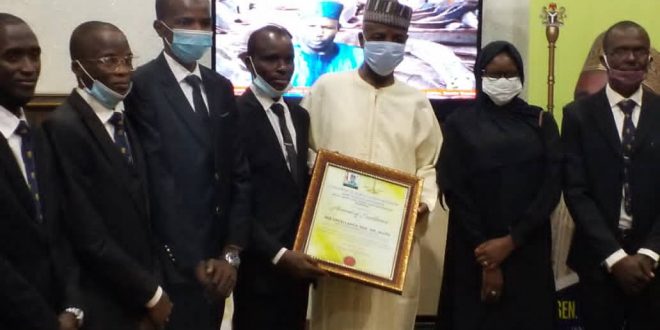 The members of the Coalition were drawn from the Abuja, Lagos, Yola, Enugu, Kano and Bayelsa  Law School Campuses. 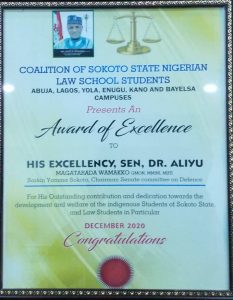 Presenting the award to Senator Wamakko on Sunday, at his Sahabi Dange Road, Gawon Nama, Sokoto, residence, the Leader of the Delegation, Salmanu Abubakar, said that,  the Association deemed it fit to bestow the Award on  Wamakko for his immense contributions, as well as relentless dedication towards the education sector.

The budding Legal Practitioners also extolled the sustained efforts of the former Governor of Sokoto State to the  development, as well as thw welfare of the generality of the indigenous students of Sokoto State , especially the law students.

Salmanu further explained that, Senator Wamakko is an astute leader, with listening ears and an unparalleled role model whose unblemished style and quality leadership are worthy of emulation by all leaders.

He elatedly recalled that, when Senator Wamakko was the Governor of Sokoto State, he initiated myriad of  developmental projects that had impacted positively on the lives of the people of the state. 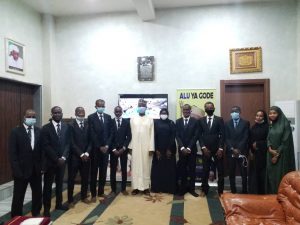 His words :” When Wamakko was thw Governor, emphasis was focussed on, Education, Agriculture, Social Welfare and Youths Empowerment among other critical and progressive projects.”

Salmanu added that, Sokoto was hugely  transformed then, more than what obtains now where education was being handled with kid gloves.

They prayed the Almighty Allah to forgive their shortcomings and grant them Jannatul Firdausi and give Senator Wamakko the formidable fortitude to bear the irreparable losses.

Responding , shortly after receiving the Award, Senator Wamakko expressed delight for the immeasurable gesture and urged them to  concentrate
fully on their studies.

The Sarkin Yamman Sokoto also said that, Nigeria was in dire need of young and vibrant lawyers that the nation can depend upon and be proud of in the future.

He admonished them to always be pious in their routine personal and academic activities wherever they find themselves .

Wamakko averred: ” I am optimistically confident that, the sky is your limit, more importantly,  if you focus more attention  on your law studies.

” I am also assuring you of my ceaseless unflinching moral and financial support, fervent prayers, as well as fatherly wise counsel, hence,enable you to reach to the pinnacle of your studies and