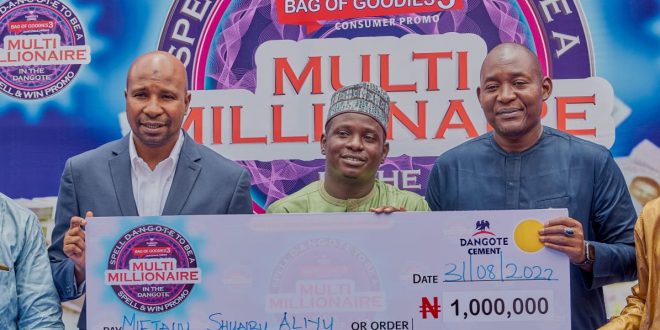 Five fresh millionaires have emerged in Kano as part of the ongoing Dangote Cement promotion which started in July.

Speaking at the presentation of cheques to the five new winners, Group Head, Sales and Marketing, Rabiu Umar, said the promo is a way of giving back to society and rewarding customers of Dangote Cement Plc.

He said the ongoing “Bag of Goodies Season 3” National Consumer Promotion will see the company give out a whooping N1billion to its customers across the countries, adding that this huge money will further ginger economic activities as people are more able to invest.

“Customers and distributors of the product, as well as other Nigerians, can be millionaires many times over. The promotion, initiated by the President/CE, Aliko Dangote is all about transforming the lives of Nigerians, especially with the current situation of economic challenges facing the Country,” he said.

The Pan-African Cement manufacturer had in July unveiled a Spell Dangote and become Millionaires in a season 3 of its Bag of Goodies National Consumer promo, in Lagos during which the Company announced that 500 consumers would win a million naira each while another 100 would win N5million Naira within four months.

Speaking to newsmen, one of the winners, Auwal Abdullahi, 31, and a father of three, spoke glowingly of Dangote Cement Plc and added that he’s probably the first millionaire in his family.

He promised to use the money judiciously through reasonable investment in the cement sector, and also support his family’s recurrent needs.

The Season 3 promo is expected to produce 125 millionaires monthly with N1 billion in total to be won both cash and otherwise.