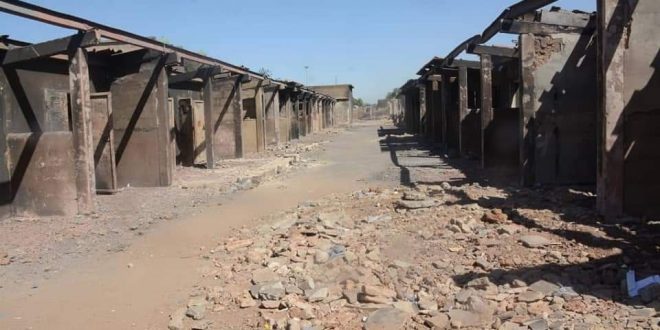 FG to help rebuild burnt Sokoto Central Market- Gambari
Press Release
The Chief of Staff to President Muhammadu Buhari, Professor Ibrahim Gambari, says the Federal Government will assist the Sokoto State Government to rebuild the burnt Sokoto Central Market.
Gambari, disclosed this on Monday in Sokoto, when he led a high powered delegation to commisserate with the people and Government of Sokoto State, as well as the  victims of last Tuesday’s inferno of the market,on behalf of President Muhammadu Buhari. 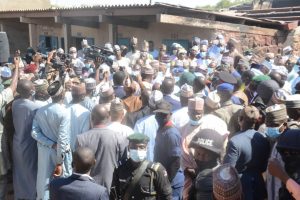 Other members of the high powered delegation during the commiseration visit were : Senator Aliyu Magatakarda Wamakko, as well as the Ministers of Police Affairs, Communcations and Digital Economy and that of Humanitarian Affairs, Disaster Management and Social Development, Alhaji Muhammadu Maigari Dingyadi, Dr Isa Ibrahim Ali Pantami, respectively.
The delegation had paid separate commiseration visits to Governor Aminu Waziri Tambuwal,at Government House, Sokoto, Sultan of Sokoto, Alhaji Sa’ad Abubakar and had also visited the victims at the Sokoto Central Market.
Gambari said that , President Muhammadu Buhari was extremely concerned about the plight of the victims and described Sokoto people as very industrious.
Also speaking, Senator Aliyu Magatakarda Wamakko, averred that, President Muhammadu Buhari was deeply touched with the blaze.
” This historic and invaluable visit has shown the level of concern the President has for the people of Sokoto State,” he added.
Responding, Governor Aminu Waziri Tambuwal said that , the victims, people and Government of the state were highly consoled and delighted with the visit .
Tambuwal commended Buhari for earlier issuing a statement on the inferno, as well as despatching the high powered delegation, adding, ” we are thanking the Present fof his love.”
At the Palace of the Sultan of Sokoto, Gambari said that , the Federal government will facilitate the speedy reconstruction of the burnt market.
This, the Chief of Staff, noted, was to ensure the early commencement of commercial activities at the market , in the bid to ensure that, the victims bounce back in full force .
The Sultan advocated the speedy reconstruction of the badly damaged Market and expressed delight with the love the President had for the people of the state, as well as the Muslim Ummah.
At the Market, Gambari described it as the hub of economic activities of Sokoto, Kebbi and Zamfara States, as well as other West African countries.
” The Federal Government will assist the state government and the local authorities to ensure that, the burnt market is rebuilt and even make it better than it was before,” he vowed.
Tambuwal disclosed that, the market had no fewer than 16,000 shops  and 2000 makeshift  stalls, sixty per cent of which were affected .
Signed:
Bashir Rabe Mani, Dan Masanin Mani,
Senior Special Assistant, Media and Publicity,
Senator Aliyu Magatakarda Wamakko,
Monday, January 25,2021.
Share