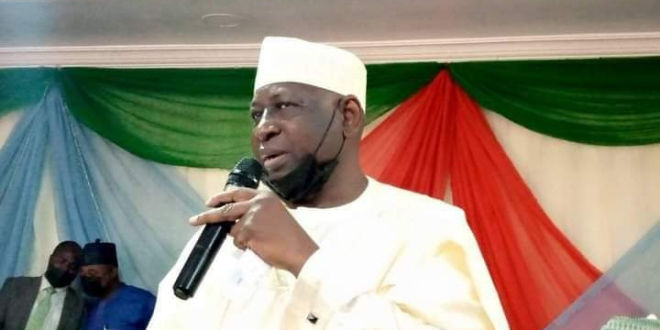 Former Zamfara state governor, Alhaji Mahmud Aliyu Shinkafi has expressed confidence in the state’s leadership of the All Progressives Congress APC led by Hon. Tukur Umar Danfulani.
In a statement Signes by Yusuf Idris Gusau
APC Publicity Secretary  Zamfara State  made available to journalist revealed that.
Shinkafi who received the state Chairman of the party at his Abuja residence on Friday, also explained that this is due to the successes recorded by the new leadership in uniting members of the party and carrying the executive members along in decision making and while carrying other activities of the party.
According to him, the current executives are made up of capable and energetic persons drawn from either the public or private sectors with proven records of integrity who are full of ideas of how to make the party grow stronger.
He therefore urged the chairman to continue to build on the unity through constant consultations which will further ensure that the party remains focused and sure of winning all coming elections in the state saying as the party is becoming more popular and gaining people’s acceptance as a result of the good leadership.
He said while closely working with his members of executive, the chairman should continue to respectfully receive any returnee or new member and promised to always lend his support for the greatness of the party.
Earlier, the state Chairman, Hon. Tukur Umar Danfulani stated that he was at the APC chieftain’s house along with some members of the executive to convey the appreciation of the party for the support being rendered to it by prominent sons and daughters of the state which has continued to place the party in high esteem in the state and beyond.
Danfulani who promised to always consult for the betterment of the party, asked the chieftain to maintain the synergy existing between the executives and the stakeholders.
Share