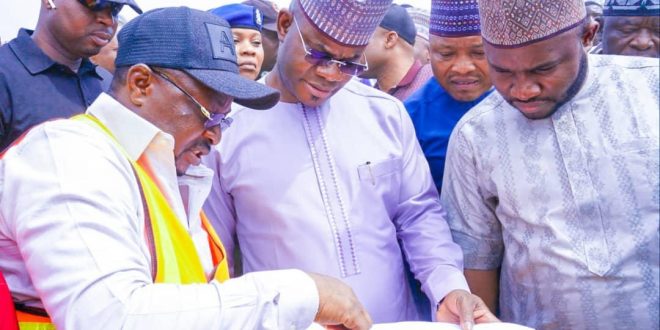 The Kogi state Governor, Alhaji Yahaya Bello wants contractors handling the construction of the Ganaja flyover to hasten the work by ensuring that the project is qualitatively completed before the stipulated time of delivery.

In a statement Signed by Onogwu Muhammed
Chief Press Secretary to the Governor, and made available to Journalist revealed that

Governor Bello stated when he paid an unscheduled visit to the site on Saturday morning in Lokoja, the state capital.

Bello described the road as the major link between North and East of Nigeria thus drawing heavy presence of vehicular movements causing traffic congestion and inconveniences to the road users and residents.

He explained that, the complexion of the project at the stipulated time will help reduce the burden of hardship on road users, and called on the contractors to re-double their efforts by deploying mechanisms that will accelerate work.

According to Governor the state government will all do everything to ensure quality work and quick delivery described the important of project which serves as the link between travellers from the North to the East.

The Commissioner for Works, Engineer Abubakar Ohere assured the Governor that the work will be completed sooner than expected as government has fulfilled her financial obligations including payment of compensations to those whose property was within the site affected.