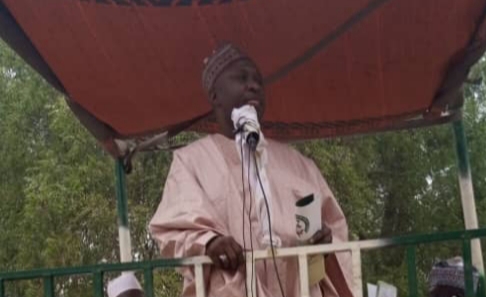 The Speaker of the House of Representatives, Rt. Hon. Femi Gbajabiamila, has urged Clerics in the country to fervently pray of Nigeria’s peace, unity and socieconomic prosperity.

Gbajabiamila gave the charge on Sunday, in Sokoto, in a message to the Appeal Fund Launching of the Sokoto State Chapter of the Jama’atul Izalatul Bid’a Wa Iqamtus-Sunnah ( JIBWIS),for its actitivities for the year 1442 AH.

Gbajabiamila said that , the unity of the country was not in anyway negotiable, adding , ” the Almighty Allah has not made a mistake by creating us as Nigerians.

” Our diverse religious, ethnic and political differences are meant to further unite us and not to divide us.”

According to the Speaker, prayers were the most potent and plausible panaceas to the myriad of problems facing the country, including the recurring security challenges.

Gbajabiamila further averred that, all Nigerians had the Civic responsibility to ensure that, the country thrives as a single indivisible nation.

” United we stand, divided we fall. We have more to collectively achieve as united Nigerians and those not divided along various ethnic, cultural and religious affinities,” the Nigeria’s number four citizen, added.

Gbajabiamila also eulogized the group for being one of the foremost religious Associations religiously committed to Nigeria’s sustenable peace ,unity and socieconomic advancement.

Gbajabiamila also announced the donation of whopping N 2.1million to the Group, out of which N 1million went to the State chapter, N 500,000, each to the Kware and Wamakko Local Governments chapters, as well as N 100,000, to the Sokoto South Local Government chapter.

Responding, the State Chairman of the Group,Sheikh Abubakar Usman Mabera lauded Gbajabiamila for the invaluable gesture, as well as his long lasting bond of cordial relationship between him and the people of Sokoto State.

Sheikh Mabera also prayed the Almighty Allah to continue to bless , protect and guide Gbajabiamila aright, as well as grant his Mother with abundant health, long life and prosperity.

The Chairman further acknowledged the ceaseless moral and financial support of Hon. Kalambaina to the Group and other religious causes .