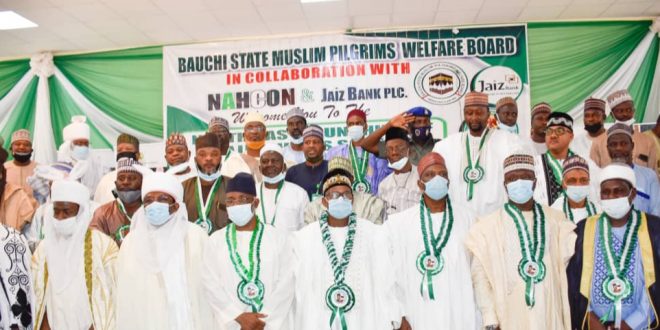 The newly built Bauchi State international hajj camp today played hosts to dignitaries from across the country, becoming the first ceremony to be held at the new structure BUILT by Gov Bala Mohammed as he flagged off the new hajj saving scheme for the northeast sub-region.

The new hajj saving scheme was introduced by the (NAHCON)in collaboration with JAIZ BANK among other things assist all Nigerians irrespective of financial status to save over the period of time for the purpose of hajj.

Gov Bala Mohammed while flagging off the sensitization exercise on the new hajj saving scheme commended the federal government and the leadership of (NAHCON) for the initiatives which he believed would directly assist most Nigerians save gradually for hajj purposes.

He said his administration would continue to support hajj activities for societal growth and development.

Chairman/CEO NAHCON sheikh Zikrullah Kunle Hassan and the MD JAIZ BANK Dr Hassan Usman commended governor Bala Mohammed for his various support to hajj activities particularly the construction of a new befitting hajj camp in the state, and that the scheme seeks to assist most Nigerians perform hajj at ease.

Special adviser to the governor on pilgrims Isah Babayi Tilde, and the Executive secretery bauchi State Muslim pilgrims welfare board Babangida Tafidal all applauded the efforts of Gov Bala Mohd for coming with policy that guarantees the success of hajj activities in the State.