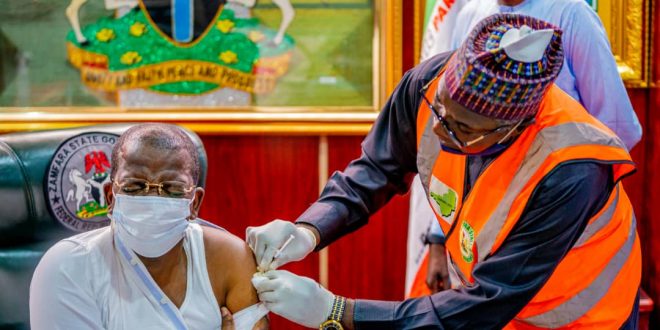 In a statement Signed by YUSUF IDRIS GUSAU
Director General, Media Public Enlightenment and Communications to the Governor and made available to news men in Gusau revealed that.

Governor Matawalle was administered the injection by the state Commissioner of Health, Hon.Yahaya Mohammed Kanoma while the Speaker, Zamfara State House Assembly, Hon. Nasiru Maazu Magarya and the state Deputy Chief of Staff Government House, Dr. Bashir Mohammed Maru were among the first to receive the first Jab of Astrazeneca Vaccine along with the governor. 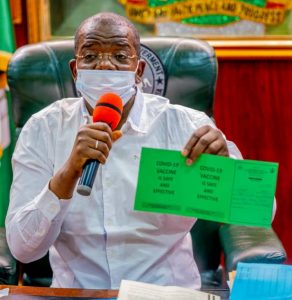 Speaking after receiving the injection, Governor Matawalle urged citizens of the state to accept the Vaccine as physicians have already explained that it doesn’t have any negative effect on human lives.

He sais the Vaccination will ensure total protection from the deadly disease of Covid-19 as globally acknowledged.

The Shattiman Sakkwato also said a public Enlightenment campaign has already commenced for the people of the state to accept the Vaccination.

He explained that 27, 960 people of the state are expected to be vaccinated in the first circle of the excercise.

He explained that the injection is free of charge and that the state government will ensure total compliance with all the Covid-19 Presidential Task Force guidelines in the Vaccination period.

Kanoma further said that the Vaccination will also be flagged off in all the 14 local government councils and the Security formation for effective utilisation of the Vaccine.