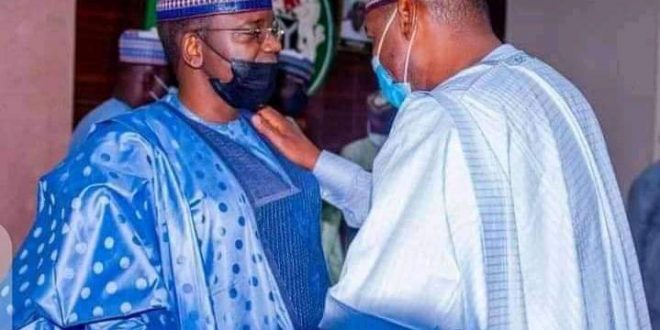 In a statement Signes by YUSUF IDRIS GUSAU
Director General, Media, Public Enlightenment and Communications made available to journalists revealed that.

During the meeting, efforts of the two governors in addressing the security situation affecting their states and the dimensions which the terrorists are carrying out attacks on innocent citizens were discussed where the need for total cooperation from citizens of the affected states is seen as crucial in order to defeat the insurgents.

Both governors also shared notes in the mode of their operations in handling the security situation with a view to using both approaches to achieve the set objective.

Meeting also agreed to share genuine intelligence in order to maintain the firm stance in dealing with obstructors of government efforts of restoring the lost peace and maitainance of security of citizens lives and properties.

The governors also agreed to deal decisively with anybody found undermining their efforts of peace building especially from state as well as non-state actors.

The meeting noted the roles of traditional institutions in the restoration of peace and agreed to work closely with the traditional rulers but noted the unpleasant attitude of some traditional rulers who allow themselves to be used by mischief makers to thwart the efforts of the government and security operatives by refusing to provide intelligence that will lead to the arrest of criminals in their domain to security agents but continue to cover them unlawfully to harm the larger society.

President Muhammadu Buhari received accolades from the two state chief executives for the support being extended to their states in tackling the carnages.