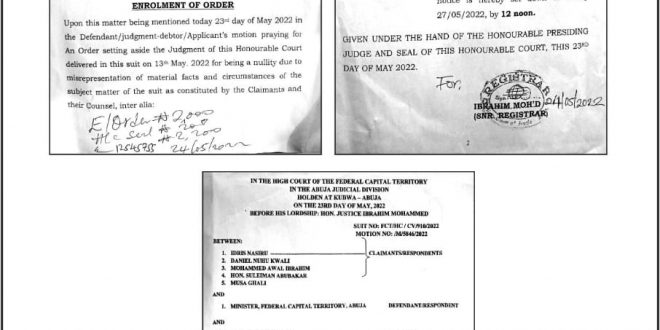 The Centre for Reform and Public Advocacy (CRPA) has raised the alarm over what it described as a disturbing trend in the nation’s judiciary in which two court orders were made by two Judges – Hon. Justice Ibrahim Mohammed and Hon. Justice O. A. Adeniyi – on the same application over the same subject matter.

The group in a statement signed by Mr. Ifeanyi Okechukwu warned that this bizarre move is capable of eroding the integrity of the nation’s judiciary and bringing it to disrepute.

According to the group, what Justice Mohammed and Justice Adeniyi is unprecedented and unheard of anywhere in the history of the judiciary in Nigeria that two judges of the same court will sit over one suit in their respective courts on the same subject bearing the same suit number and made different orders on the same day.

Justice Mohammed had on May 13, 2022 ruled that the tenure of the Chairmen of the six Area Council and their Councilors in the FCT is now four years.

But in a desperate move to have the judgment set aside, an application was filed by Hon. Abubakar Jabrin Giri, the Chairman-elect of Gwagwalada Area Council at the Registry of Hon. Justice Ibrahim Mohammed’s Court, while the Hon. Minister of the FCT filed his own application to set aside the judgment at the Registry of Hon. Justice O. A. Adeniyi’s Court. The applications pending in both courts have the same suit number (FCT/HC/CV/910/2022 and the parties in the suit are the same, that is, IDRIS NASIRU & 4 ORS VS. THE MINISTER OF THE FEDERAL CAPITAL TERRITORY, ABUJA.

It describes the action of the judges as shameful and not a reflection of the high standards expected of judges of the FCT High Court.

The group warned that the prevailing public perception that the judges may have been compromised to set aside the judgment extending the tenure of the Chairmen of the six Area Councils and their Councilors is destructive and could lead to loss of confidence in the judicial process which in turn will result in anarchy as people will resort to self help to resolve their differences instead of taking the due process of law.

The Centre for Reform and Public Advocacy called on the Chief Judge of the FCT High Court and National Judicial Commission (NJC), and other well-meaning Nigerians to act immediately to save the judiciary from this shameful act.