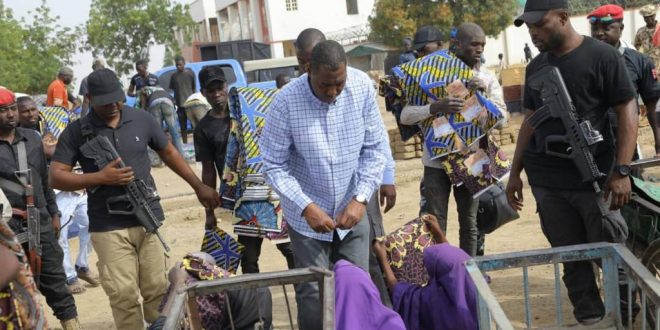 Borno State Governor, Professor Babagana Umara Zulum on Tuesday embarked on humanitarian responses in Dikwa town of Dikwa Local Government Area, which made him to pass the night in the town.

The interventions that reached 40,000 households was part of the Zulum’s routine approvals of support to vulnerable persons, even as communities affected by insurgent attacks, are now engaging in agricultural activities and other businesses towards sustainable means of livelihood.

Governor Zulum travelled from Maiduguri and arrived Dikwa at night, after which he held meetings with community leaders including the member representing Dikwa in the Borno State Assembly, Zakariya Mohammed, and Chairman of Dikwa Local Government, Mohammed Alhaji Gumsama with issues of humanitarian challenges facing internally displaced persons and vulnerable returnees, discussed.

The following morning, Wednesday, the Governor supervised and also got directly involved in the distribution of food and non-food items to a combined number of 40,000 households, with each household made up of at least, six persons.

The beneficiaries comprised 24,000 women and 16,000 men, despite some of them being couples.

Some humanitarian, Government, and party officials were also part of the trip.

Aside distribution of cash and food aid, Governor Zulum assessed critical public services, and while doing so, he directed the immediate construction of a mega-size Islamic school to meet the needs of community members.