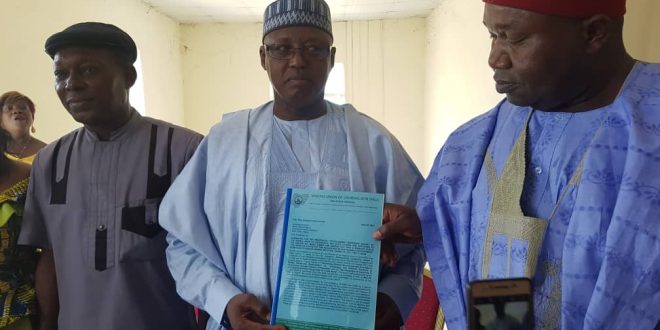 Journalists working in Imo state, have through the Nigeria Union of Journalists, NUJ, nominated Borno State Governor,  Professor Babagana Zulum, for the union’s “Distinguished Leadership Award” in recognition of his selfless and people-driven leadership.

The NUJ presented the nomination letter to Zulum’s senior special assistant on Media, Babasheikh Haruna and the the governor’s Special Adviser on Community Relations, Chief Kester Ogualili, who hails from Anambra state.

They were in Owerri, the Imo State capital, Friday, to homour an invitation by the NUJ, ahead of the union’s summit planned for May 25.

In the nomination letter, which was jointly signed by Imo chairman of the union, Chief Christopher Akaraonye, secretary, Juliet Dim and the summit’s planning committee chairman, Emma Odibo, the NUJ wrote that Zulum was selected by a panel of journalists, after thorough evaluation of leaders across the country.

The NUJ described Zulum as a selfless leader whose only interest is making lives better for his people.

“Though we’ve been experiencing a lot of challenges, we are working hard to change the narrative in Borno State. As I am talking to you, a lot of transformation is taking taking place despite the crises. This has been overshadowed by what’s currently happening, but I assure you that it’s only a matter of time we will have these problems behind our us” Haruna said.

He stressed that Zulum is currently grappling with problem of resettling the persons displaced by the insurgents in the state and expressed optimism that peace will return to the state.

Also speaking, the Special Adviser on Community Relations, Kester Ogualili, described Zulum as one of the most detribalised Nigerians, stressing that the Igbo community in Borno State are so proud that the honour was coming from south east.

He described Borno as second home to them,  adding that the Igbo community have enjoyed immense benefit from Zulum right from his days as the rector of Ramat Polytechnic.

He said, “We the Igbo community in Borno thought it heartwarming for you to have remembered our principal. We are at home in Borno. Zulum does not call us non-indigenes, but tax payers.  We live in Borno and that’s where we train our children. He is a true bridge builder and a certified nationalist” Ogualili noted.

He added that Igbos’ relationship with him did not start as Governor but Ramat Polytechnic, saying there are many Igbo  teachers.

“Igbo are doing well in Borno because they are not being marginalised. We have benefited from Borno entrepreneurship programme and during Christmas, he provided vehicles for us to go home and also parcel for widows in our communities. No discrimination in admissions in Borno state University. Equal chance for everyone and no discriminatory fees” the adviser added.

NUJ’s Vice-Chairman, who chairs the summit’s planning committee, Emma Odibo, while handing over the letter, said the council was proud to be associated with Zulum’s achievements in Borno, especially the fight against insurgency.