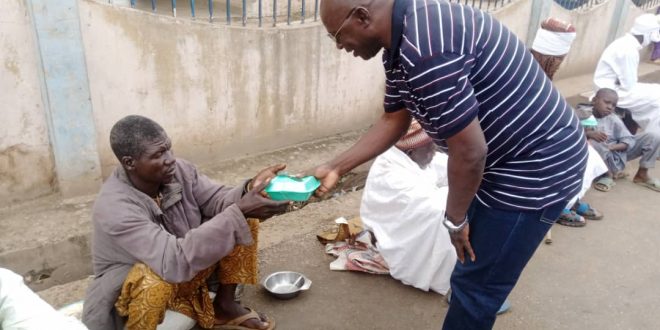 ….to sthrenthening Christian and Muslims relationship.

The general overseer of Christ Evangelical and life intervention Fellowship Ministry, pastor yohanna buru has doled out over 1000 take- away food packages to poor Muslims, and orphans for sallah celebrations.

Adding that The essence is to help the poor Muslims to celebrate sallah with joy and happiness like any other Muslims with food and other eatable items.

Distributing the sallah food to some Muslims pastor yohanna buru said, every year, the church usually cook for over 600 -700 people’s but this time .it was multiply due to the increase in the figures of people at the various distribution places.

Must of beneficiaries were the poor street beggars, windows , orphans and some internally displaced person.

According to the Christian clergy , the Church was in the forefront of promoting religious tolerance,better understanding and promoting interreligious dialogue for peace and unity in the Kaduna State, while adding that the essence was to deepen peaceful co-existence between Muslims and Christians, and to boost religion tolerance .

This year sallah celebrations comes amids of increased increased collapse of insecurity, high cost of food prices, and scarcity of fuel across the country.

This is the 11th year , the church is distributing foodstuffs to the poor needy Muslims during sallah festivities and the holy month of Ramadan

(we are targeting one thousands for the sallah food distribution and little amount as happy sallah for the kid which are mostly orphans and widows)
Buru recalled that the Church had distributed over 1,000 packaged food and drinks with new clothes to Internally Displaced Persons,and destitutes in 2021.

The cleric stressed that Islam and Christianity have many things in common as contained in the Bible and Qur’an, adding, “we are all brothers and sisters and must support each other to live in peace and harmony.”

Buru appealed to wealthy Muslims and Christians nationwide to support the poor, including widows and orphans to ease their pains.

Mallan Tukur zubairu is the state leader of blind people and who is also one of the beneficiaries,

He said today is sallah but no one remembers us