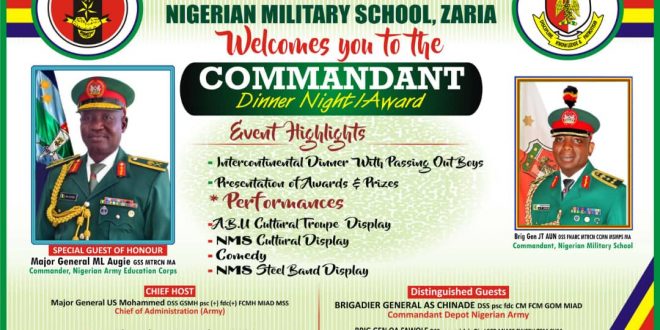 The Deputy Governor Kebbi State Colonel Samaila Dabai Yombe (rtd)has attributed the success recorded by the Nigerian Military School Zaria to the commitment of the instructors.

He stated this at the 63rd Annual Speech and Prize giving day ceremony of the passing out Boys held at the Ogundeko Hall.

Col. Yombe was the Special Guest of Honour was represented by Major. General Muhammad M. Bunza said, the efforts and commitment by the instructors have shown in the performance of the Boys in their academic and Military training.

He acknowledged the achievement recorded on the facilities improvement and academic excellence in the school.

The Deputy Governor said as an Old Boy of NMS he challenged the Boys to leave up to the expectations by dedicating themselves at all times.

According to him, NMS is an instrument of national integration and to avoid anything that will spoil their carrier as well to good Ambassadors of the School anywhere they may find themselves in the future.

In his remarks the chairman of the occasion Dr. Hamid Bobboye Executive secretary of UBEC described NMS as a unifying symbol of Nigerian unity.

He said the school has contributed to the development of Nigerian Army and reminded the Boys of the challenges ahead as they are going to the larger society.

According to him, despite hard training for 6years still they stride hard to contain and advised them to be good ambassadors of NMS.
Earlier in his welcome address the Commandant Nigerian Military School Zaria Brig. Gen. Jonathan T. Aun said the school has develop into a national asset.

He said NMS has combined both academic and Military training for the Boys through out their stay in the school.

General Aun said a total of 229 Boys are graduating for the year 2021.