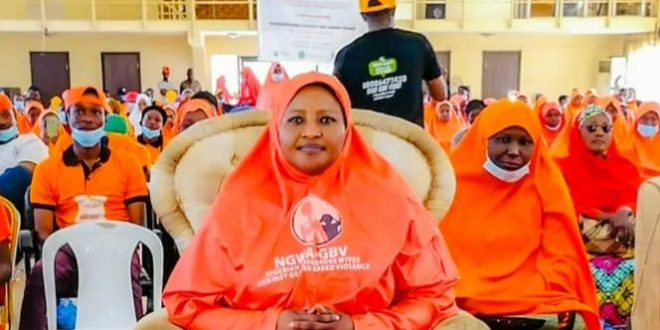 Dr Zainab Bagudu, wife of Kebbi Governor, has organised a rally to drum support for collaborative efforts to end Gender Based Violence (GBV) and child abuse in the state.

The News Agency of Nigeria (NAN) reports that the rally tagged: “1st GBV Awareness Walk”, took-off from Emir of Gwandu’s palace in Birnin Kebbi and terminated at Presidential Lodge near Government House.

It was followed by a town hall meeting as part of “16 Days of Activism Against Gender Base Violence” programme organised by the state Gender Based Violence Technical Working Group.

Mrs Bagudu said at the town hall meeting that it was time for people of the state to say NO to gender violence.

She said that the advocacy had led to the passage of the Bills on GBV and that of Child Right by the state House of Assembly.

She commended Gov. Atiku Bagudu for his support and assured that he would soon sign the two bills into law.

The governor’s wife, however, said more sensitisation would be required even after the bills were assented to by the governor, to ensure smooth implementation.

“Over 80 per cent of people in Nigeria reside in the rural areas, they don’t know about laws, they are governed by their own laws, laws of the society, laws of their religion or laws of their culture. 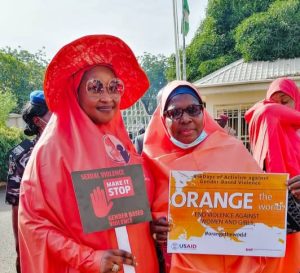 “And these laws that we have in the justice system do not mean so much to them.

“We need to sensitise the society about these laws and the opportunity it gives victims to access justice; that’s why we fought hard to ensure that these laws are there,” she said.

Mrs Bagudu stressed that people ought to care when cases of GBV and child abuse occur.

“Our people understand what is right and what is wrong; a lot of you in this hall might be guilty of abuse.

“You need to know that by simply looking at a girl and say look at her, degrading her, it is a form of abuse. If, in your class, you look at a boy and castigate him, it’s also a form of abuse.

“I want you to understand that there are many forms of abuse, abuse does not mean taking your hand and beating somebody or inflicting injuries, these are the extreme forms,” the governor’s wife noted.

In her speech, the state Attoney General and Commissioner for Justice, Hajiya Ramatu Adamu assured that the two bills passed by the state assembly would be signed into law after certain modifications.

According to her, the bills will be sent back to the assembly for some corrections soon.

The commissioner encouraged parents and the general public to report all acts of violence against children to appropriate authorities, so as to rid the society of the menace.

She assured that the government was ready to prosecute anyone abusing children and related offences.

Adamu however expressed concern over the attitude of parents unwilling to prosecute GBV and child abuse cases under the pretext of protecting the future of their children.

“Their reasons for withdrawing the cases include; the image of the girl is at stake, she may not get husband, society may stigmatise against her, among others.

“I hope with this awareness, girls, parents and the society will now begin to understand.

“As a lady, when somebody raped you, it is not your fault. If you are raped, it means you are decent not a loose lady, because those who are not decent allow themselves to be used, not raped,” she noted.

The News Agency of Nigeria (NAN) reports that participants at the town hall meeting included students from tertiary institutions and Civil Society Organisations, among others.