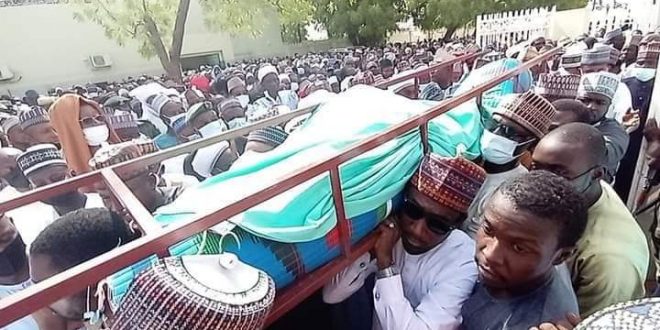 The remains of late Hajiya A’ishatu Ahmadu Bello, the eldest daughter of late Premier of the defunct Northern Nigeria , Sir Ahmadu Bello(Sardauna of Sokoto), was on Thursday afternoon laid to rest, at the historic Hubbaren Danjada, at Binanchi, in Sokoto, according to Islamic injunctions.

This is contained in a statement signed by the Senior Special Assistant on Media and Publicity to Senator Aliyu Magatakarda Wamakko, Bashir Rabe Mani and issued to Newsmen on Thursday .

Her funeral prayer was conducted at Sultan Bello Jumaat Mosque, Sokoto , after the Zuhur prayer and it was led by the Chief Imam of the Mosque , Sheikh Malami Liman Akwara.

The late Hajita Aisha died on Friday, April 23, 2021, at a Dubai Hospital, at the ripe age of 75, after a prolonged battle with diabetes.

She was the wife of the Chairman of the defunct Northern Nigeria Housing Corporation and one of the members,who represented Sokoto Province at the House of Representatives in the 1960s, Alhaji Ahmad Danbaba, Marafan Sokoto.

Among her children is Magajin Garin Sokoto, Alhaji Hassan Ahmad Danbaba and the wife of Ambassador Shehu Malami, Sarkin Sudan.

Commenting on her demise , the Senate President , Dr Ahmad Ibrahim Lawan, said that , the deceased lived a good and decent life .

” Death is one of the phases in our lives and all mortals must taste it .Her death is a national loss .

” We will miss her forever as she was a proud Mother to all Nigerians ,” he averred .