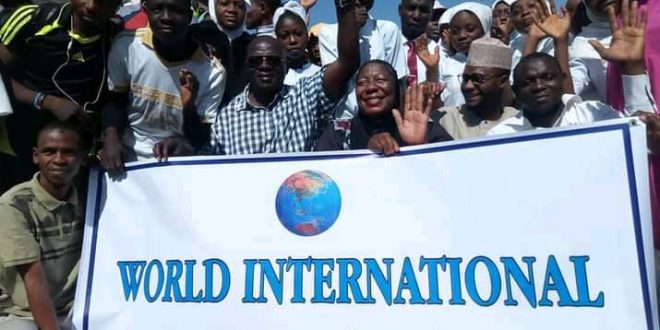 As the world celebrate world international HIV/ Aids day, the chair person of  a Non- governmental organization (Peace Ambassadors advocacy  to protect the right of children ,women, orphans and widows in Nigeria )MRS Deborah labari   has called on all Nigerians  to shun all forms of stigma ,discrimination or differences among person living with the virus in the country.
According to her, despite all  effort by both states and federal government ,Humanitarian NGO,and concerned civil societies of Ngeria with faith base organization which is toward raising more campaigns and awareness against the spread of the virus, There are still many people that stigmatizes women and children in both rural and urbans communities across the country
She make the statement during an interview with journalists in kaduna to mark world international Aid at the press center,
She note that ,there are so many harmful effects associated with stigma and discrimination of person living with the virus which include feelings of shame, hopelessness and isolation,  reluctance to ask for help or to get treatment, lack of understanding by family, friends or others, fewer opportunities for employment or social interaction, bullying, physical violence or harassment.
She stressed the need for all Nigerians to stop discriminating  against person living with the Virus simply because that has violet their right.
While calling on Nigerian both home and abroad to Learn how to talk openly about HIV and stigma in a way that can help empower those living with HIV.
She still emphasized on the need for couples to be tested medically before marriage to avoid having childrens with the virus.
She said “If each of us is committed  toward  making positive changes in our families and communities, we can help end HIV stigma and work to stop HIV together)
(Adding that there are many babies with the virus today ,simply because parents refuses to go for medical text before the marriade,while some hide their identity)
Urging citizens to equally Avoid stigmatising people with mental illness by seeing the person first and not labelling them by their mental illness.
(You can help challenge stigma by speaking up when you hear people around you make negative or wrong comments about mental illness,or discrimination againt person living with HIv/Aid).
Similarly some faith base organization in the country has embarked  on visiting some schools in the metropolis with the aims of sensitizing students dangers of stigma and religious ways to halt discriminating against person living with the virus
Pastor yohanna buru, the national president Peace revival and reconciliation foundation of Nigerian  says, every year, he organizes team of  volunteer -Muslims and Christians scholars to visit schools and sensitizes the students on harmful effect of stigma and discrimination againt person living with all kind of diseases including tropical diseases.
He says, all religion in the world has condemn all forms of stigma and discrimination against mankind especially person living with HIV/AID
Stressing that every sick person need healing not hatred or discrimination
Buru make the called when he visited a kaduna based school ,which is part of his annually visit to mark Aid day
He then called on religious leaders to redouble their effort toward sensitizing the general public on religious guide toward tackling stigma,hatred and discrimination against any person living with all kind of diseases.
Share