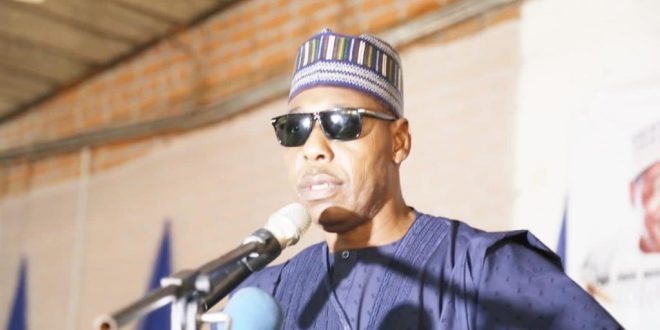 Borno State Governor, Babagana Umara Zulum on Wednesday undertook a supervisory and interactive visit to the Ramat Polytechnic in Maiduguri, at which approved the permanent recruitment of 20 children of staff, with priority to those whose parents died working at the school.

The Governor also addressed multiple challenges after he sought to know from the academic and non-academic staff of the Polytechnic, the challenges they were facing, all of which they listed.

Zulum, a University Professor was a student of the Polytechnic from 1986 to 1988 for National Diploma in Irrigation Engineering before he became rector of the same school from 2011 to 2015.

As Governor, Zulum is now a visitor (overseer) to the state-owned polytechnic.

Professor Zulum has paid countless visits to the Polytechnic either to oversee activities, to commission projects or to lay foundation stones.

At Wednesday’s visit, Zulum directed a committee he had constituted from amongst staff of the school to fairly select 20 children of staff particularly those of deceased parents, after determining their qualifications for automatic employment as lecturers, instructors and other categories.

He also indicated readiness to approve other ways to support families of staff.

The Governor, in responses to the challenges raised differently by the three union representatives, directed the state’s commissioner of finance to within 24 hours, remit about N12m to the Academic Staff Union of Polytechnics, which was deducted from salaries for the purpose of union dues.

Zulum also directed the SSG to immediately convey approval for inclusion of two staff said to have been excluded from a new policy of a 65-years retirement age, which was extended from 60 years.

… Sets 14 days to clear all issues

Governor Zulum directed the state’s commissioner for Higher Education, Science, Technology and Innovation, Dr Babagana Mallambe Mustapha to compile all other issues raised by management and union representatives of the polytechnic for presentation to him.

Zulum promised to within two weeks, address those issues that could be dealt with while on others, he would work with union leaders to find ways of addressing them through the considerations of prevailing realities.

… To construct 100 staff houses at Ramat

Governor Zulum, in response to challenges of housing faced by staff, announced plans to approve the construction of 100 houses for staff of the polytechnic.

He however noted that such a project can only be started after the 2023 electioneering period.

The Governor promised the inclusion of ramat polytechnic staff during considerations for allocation of Government estates which are either being constructed and nearing completion or those that have been evacuated by internally displaced persons.

Governor Zulum also announced that he hopes to approve the payment of promotional benefits by January 2023 which will be in three months time.

He noted that problems of shortage of finances in the midst of security and humanitarian interventions are amongst his drawbacks.

Nevertheless, he promised that Government will look at its finances with a view to paying promotional benefits in the coming year.