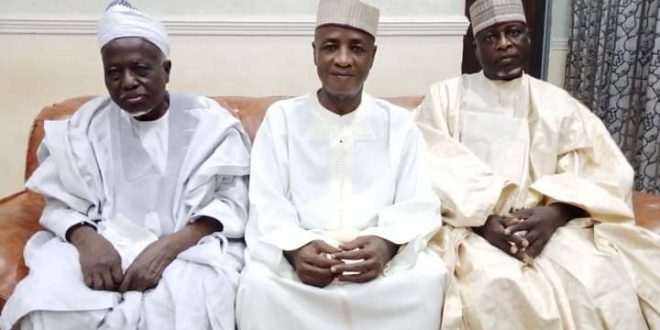 Some former Local Governments Chairmen of the defunct Sokoto State, on Tuesday reincarnated old memories when they paid a solidarity visit to their colleague, Senator Aliyu Magatakarda Wamakko.

This was contained in a statement signed by the Senior Special Assistant on Media and Publicity, Bashir Rabe Mani and issued to Newsmen on Wednesday.

The visitors, alongside Wamakko, had successfully steered the ships of their various local governments in 1986, in the old Sokoto State that gave birth to the current Sokoto , Zamfara and Kebbi States.

The other visitor was Alhaji Garba Galadima Aliero, the former Chairman of the old Jega Local Government, out of which the present Jega, Maiyama and Aliero Local Governments, Kebbi State, were carved out .

It could also be happily recalled that, Senator Aliyu Magatakarda Wamakko, a former Governor of Sokoto State and an incumbent Senator, representing Sokoto North Senatorial District, was the former Chairman of the defunct Sokoto Local Government that gave birth to the current Sokoto North, Sokoto South Kware and Wamakko Local Governments.

The former Chairmen were at the Sahabi Dange Road , Gawon Nama, Sokoto, residence of Wamakko on a friendly visit , to further cement the existing bonds and cordial relationships between the trio .

The visitors and their host , who were visibly elated, held a lengthy discussion and went down memory lanes , as they especially reminiscenced on the momentous events when they led their various local governments.

Friendly visits like this one, will indisputably help to strengthen and consolidate the existing cordial relations between the leaders of the three states, as well as bolster their unity abd socioeconomic prospertity .