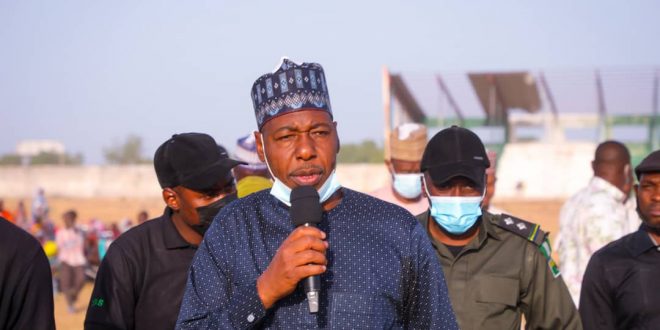 After spending a night in Bama, Borno state governor, Professor Babagana Umara Zulum on Wednesday supervised the distribution of N200m and food items to over 70,000 displaced households.

The displaced persons have been denied access to their farmlands, markets and other means of livelihood for years as a result of the over a decade long insurgency. 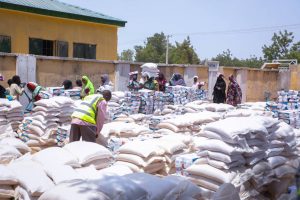 Zulum’s sustained humanitarian intervention, which is combined with agricultural activities to create livelihoods, is part of multidimensional approach to deny Boko Haram opportunities of using social and economic means of recruiting fighters from displaced persons.

The following day’s cash and food distribution, the latest in series, took place in five centers across Bama town.

Each 40,000 female heads of households received two packets of sugar, a wrapper and a token of N5,000 amounting to N200 million naira. 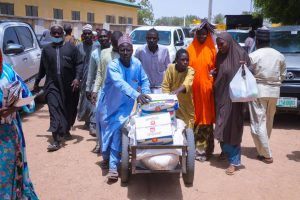 30,000 male heads of households each received a bag of rice, a bag of maize grill and a carton of spaghetti.

“We share your pains and we are appealing to everyone of you to continue with the prayers for peace to return to our dear state” Zulum said.

The governor arrived Bama on Tuesday during which he ordered the immediate construction of 500 houses in Nguro Soye, a community in Bama. 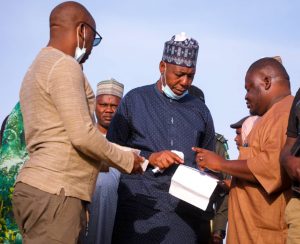 The Governor also announced the rehabilitation of additional 1,000 private homes in the town, which were destroyed by insurgents, in order to facilitate resettlement of displaced residents.

Zulum was at the palace of the shehu of Bama, Shehu Umar Ibn Kyari Ibrahim El-kenemi, during which he told the monarch that he was in the town for on the spot assessment of schools, promising to work towards educational access for all school aged children in Borno State.

The Governor also granted the Shehu of Bama’s  request for increased agricultural support to farmers ahead of rainy season.

Zulum directed the strengthening of agricultural supplies and activities in Bama to meet increasing number of returnees that might engage in farming.