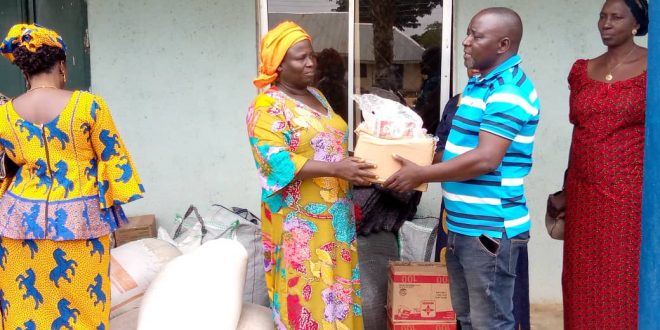 It was a sigh of relief as the Southern Kaduna Peoples Union (SOKAPU), yesterday donated food items, clothes, blankets and medical drugs to over 10,000 Internally Displaced persons in two Camps situated in Zankwa and Samaru Kataf all in Zango Kataf Local Government Area of the State.

Mrs. Jemuta Alheri Katama, coordinator of the Women Wing who presented the items to the duo camp on behalf of the Union’s President, Hon. Jonathan Asake respectively, said it has become imperative to the Union to always identify with their peaple who have been neglected by the Government who ought to have provide succur to them.

Mrs. Jemutu Alheri Katarma while in Ecwa Widows Training Camp, noted that the carnage being meted on Atyap land calls for urgent attention both within and outside. Our peaple need help from the Government, NGOs and spirited individuals.

She noted that the carmage have turned Children to Orphans, women to widows while so many residents rendered homeless. 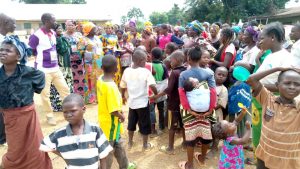 “We’re calling on the Government and the international Community to come to the aides of these victims who have lost everything, “She appealed.

The coordinator of Ecwa Widows camp in Samaru Kataf, Rev. Victor Elisha Yahaya disclosed that on the 8th June, 2021 they’ve registered about 5,500 IDPs including women and Children.

He added that out of the 19 Communities attacked, 13 was completely ravaged deserted by residents of those Communities.

“We lost two peaple from the camp including a pregnant woman, they left to attend to their domestic works but they were trapped and gruesomely killed.

“I have never seen a Government that value a life of Cow more than that of a human being like the governor of Kaduna State. He has made a lot of arrest base on rumor that our elders have killed Cows but the perpatrators have never been arrested even when they’re arrested they will be released.

“The people that are killing us are the same peaple that the Government is protecting, stressing if you move to Zango now you would see a Garrison of army protecting the peaple carrying out this heirnours act on us.

While in Gidan Rahama Christian Foundation IDP Camp in Zonkwa, the Coordinator, Rev. Gambo Waziri said they have a total number of 4761 registered IDPs in the Camp currently.

He explained that over 100 women were empowered with funds, 7 Grinding Machines were also distributer to some of the IDPs in the Camp at the first stage of the Carnage, adding, over over 40O million was spent on medicals bills and empowerment on the IDPs.

The shieldg.com observe that most of the IDPs are in dare need of food, Mattresses, and building materials to enable them return back to their Communities.