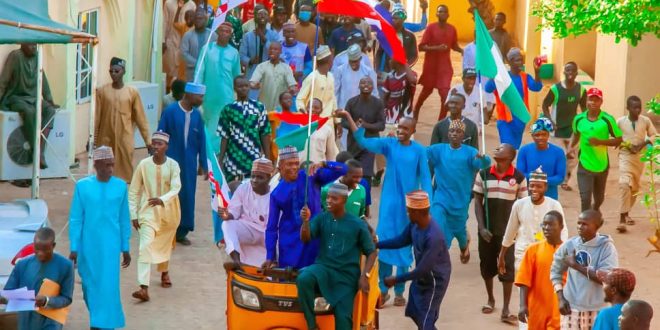 Sokoto state Tricycles Riders Association under the Leadership of Alh. Sa’adu Abubakar Asadda has staged a solidarity Walk rally in support of the Candidature of Hon. Ahmad Aliyu Sokoto as the Governorship Candidate under the Platform of the All Progressives Congress, APC in Sokoto state.

In a statement Signed by Bashar Abubakar
S.A Media to Senator Aliyu Magatakarda Wamakko and made available to newsmen revealed that.

The Chairman explained that, the Association decided to embarked on a Walk stage rally as a mark of respect and appreciation for what Former Governor of the state Senator Aliyu Magatakarda Wamakko did to them when he was a Governor.

He said the rally was among others to reawakened their members of the Association to mobilize more support for the victory of APC in the State.

He recalled that, during Wamakko as Governor,he brought Tricycles to sokoto state as a way of curving youth restiveness where many among them have benefited from the gesture.

Meanwhile, another group of youth from Gagi ‘C’ ward of sokoto south local government had Organized similar procession from Mabera Area to Gawon Nama, the Residence of APC leader in the State Senator Aliyu Magatakarda Wamakko.

Leader of the Group, Mallam Kabiru Lawal Mabera informed Senator Wamakko that, in Gagi ‘C’, APC is more united, assuring that, they will ensure more support for APC across the state.

One of the leaders of the Association, Alh. Abdullahi Mu’azu Mabera, explained that, APC in the State is becoming widely accepted hence the need to mobilize more support for it’s emergence.

Speaking, APC Gubernatorial Candidate,Hon. Ahmad Aliyu Sokoto, commended the leadership of the Associations for the rally.

He explained that, if given the mandate and elected as Governor of the state, he will provide access road in Mabera Area for the economic growth in the State.

APC leader in the State, Senator Aliyu Magatakarda Wamakko, thanked both leaders for their effort towards supporting APC in the State.

Senator Wamakko called on them to always ensure they safeguard their Permanent Voter’s Card and not allow anyone to get access to it.

He urged them to vote all APC candidates during the election so as to get more democratic benefits in the State and the Country at large.