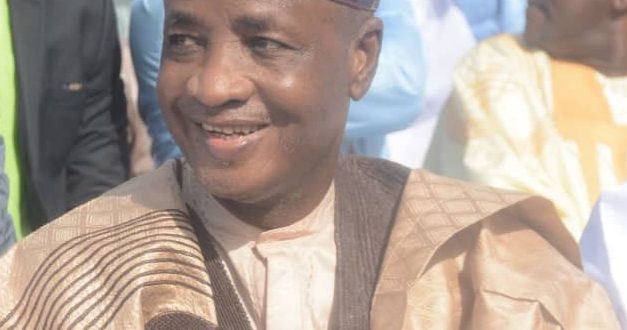 The Chairman of the Senate Committee on Defence and Deputy Chairman, Senate Committee on Anti Corruption, has donated N 500,000 to the Coalition of Radio Callers Association,Sokoto State Chapter, as well as the students who emerged victorious in a quiz competition it organized.

In a statement Signed by Bashir Rabe Mani, Senior Special Assistant,Media and Publicity,Senator Aliyu Magatakarda Wamakko, made available to journalist.

The Association organized the 2021 Inter Schools Quiz Competition as part of it’s Fourth Year Anniversary, while Wamakko who was the Guest Speaker was represented by his Senior Special Assistant on Media and Publicity, Bashir Rabe Mani.

Wamako underscored the importance of the media in the society, saying, ” the society cannot efficiently and peacefully thrive without a robust media.

” But, the Media Practitioners should continue to uphold truth, objectivity and always strive to abide by the ethics of the professison.”

The former Governor of Sokoto State also lauded the Association for it’s forthrightness and commitment to the socioeconomic development of the state and Nigeria, in general.

Also speaking , the Ardon Minanata, Alhaji Aminu Garba Riskuwa, who was the Chairman of the Occasion called on youths to continue to be united, self reliant and steer clear of all acts capable of breaching peace and unity of the state and Nigeria .

The Special Adviser to Governor Aminu Waziri Tambuwal on Youths Matters, Alhaji Nura Harande Mahe also commended the Association for being part of the development drive of the state in the last four years .

The Chairman of the Sokoto State Council of the Nigerian Union of Journalists ( NUJ), Isa Abubakar Shuni described the Coalition as a very development driver in the state.

Shuni also vowed that Journalists in the state will continue to uphold truth , fairness and objectivity, just as he urged the Radio Callers to do the same .

A Senior Producer with the Vision FM Radio, Sokoto, Ibrahim Salihu Isa, who spoke on behalf of the Radio Stations in the state, appealed to the callers to always make relevant comments on topical issues , as well as be wary of libel, sedition and defamation.

Another Veteran Journalist, Kabiru Aliyu, who is also the Director, Mobilization, Sokoto State Universal Education Board ,,while commending the Association,

also said that, it was playing crucial roles in the educational development of the state.

He also donated N 50,000 to the winning schools , as well as wrappers to four prominent female Radio Callers.

Trophies and various prizes were distributed to the winning schools , while Certificates of Recognition and Plaques were also given to some prominent individuals.