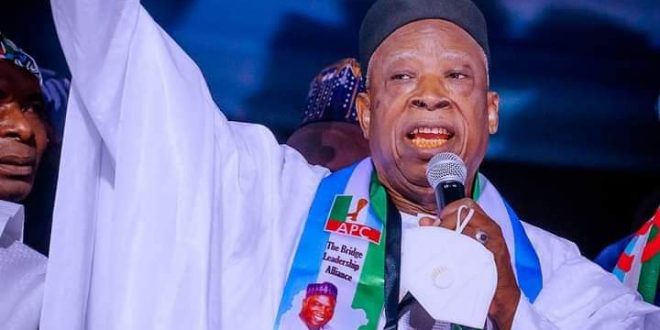 ….DESCRIBES HIM AS A HIGHLY EXPERIENCED LEADER

On behalf of the entire good and ever loyal members of the All Progressives Congress APC in Zamfara state, the Chairman, Hon. Tukur Umar Danfulani today extends his congratulatory message to the newly elected national leadership of the party under its highly experienced leader, His Excellency, Sen. Abdullahi Adamu.

Danfulani expressed confidence in the ability of the new executives to continue to move the party forward with new innovations and ideas as God has blessed the new crop of leaders with the youth and elders which will blend new ideas with experience.

He also commended President Muhammadu Buhari, the outgone National Caretaker Chairman of the party’s Extraordinary Convention Planning Committee, His Excellency, Hon. Mai Mala Buni, his team and all that contributed in making the just concluded national convention a big success.

Hon. Tukur Umar Danfulani expressed confidence that with Senator Abdullahi Adamu as the party’s National Chairman, internal democracy and party supremacy will be the guiding tools and the party will become stronger and more formidable.

The Party equally acknowledged the efforts of the state Deputy Governor, Senator Hassan Muhammad Nasiha, Senator Sahabi Ya’u Kaura, Senator Lawal Hassan Dan-Iya, Speaker Zamfara State House of Assembly, Rt. Hon. Nasiru Maazu Magarya and Members of the National and State Assemblies who contributed in one way or the other before during and after the convention.

He prayed for a successful tenure for the new national leaders to whom he also assured unflinching loyalty, support and cooperation from the Zamfara chapter of the party.