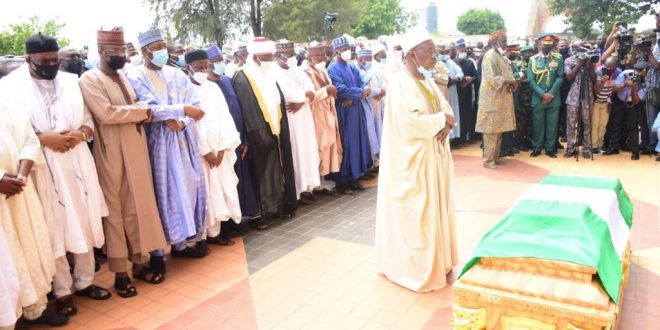 The funeral held around 1:30 at the national mosque in Abuja, was attended by the senate president, Dr Ahmad Ibrahim Lawan, Governor of Yobe state, Mai Mala Buni, chief of staff to the President, Professor Ibrahim Gambari, Minister of Defence, the Sultan of Sokoto, Inspector General of Police, Comptroller General of Immigration, amongst other serving and former public office holders, top military officers, families, friends and associates of the late COAS. 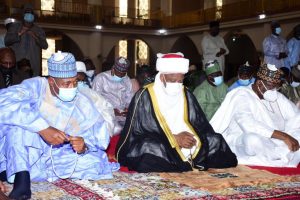 Bodies of the late COAS and five others were brought by military ambulances to the national mosque for the funeral prayers that took place immediately after zuhr prayers.

The late chief of army staff had since his appointment, been to Borno state more than six times, to  supervise ongoing military operations against Boko Haram. He had visited different army formations, mobilize and motivated troops in front lines in peace building efforts.

In his comment, Borno Governor, Professor Zulum said the late chief of staff was evidently committed to the fight against Boko Haram and was determined to significantly contribute to ending the insurgency.

“The commitment of the late chief of army staff to the fight against Boko Haram was very obvious. Within the short time he served, he had been to Borno on multiple occasions, meeting operational commanders and troops at battle fronts. In all his interactions, he regularly motivated troops. The people of Borno thank him and all our gallant fallen heroes for their unquantifiable service to Borno and rest of Nigeria” Zulum said.