Breaking News
Home / Education / Zulum to UNIMAID’s VC: Do not hide anything from FG’s visitation panel 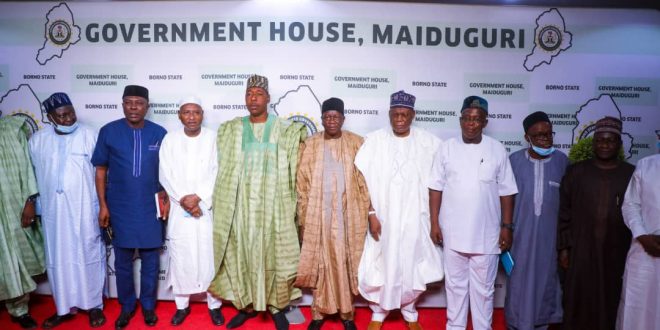 Zulum to UNIMAID’s VC: Do not hide anything from FG’s visitation panel

Governor of Borno State, Professor Babagana Umara Zulum has advised the Vice Chancellor, University of Maiduguri, not to hide problems affecting the institution during his engagement with a Presidential visitation panel that is currently in Borno.

Zulum gave the advise on Thursday at the Government House in Maiduguri when he received a courtesy call on him by the panel which was sent to UNIMAID to assess financial management, administration, and the overall condition of teaching, learning, and research by looking at the school’s physical infrastructure, laboratories and other academic activities, in line with laws establishing universities in Nigeria which require that panels undertake such visits after every five years.

The panel was led by former Deputy Governor of Kano State, Professor Hafiz Abubakar, and members were accompanied to the Government House by UNIMAID’s governing council which included the Vice Chancellor, Professor Aliyu Shugaba.

“Please do not hide anything to them (the panel). It is better to open our wound, so that our problems can be addressed” Zulum said to the VC.

“Some of the deficiencies can be addressed by the State Government, while some by the Federal Government. University of Maiduguri belongs to all of us. Those that are learning in the university are our own children. It is only for those who don’t know that will think the State has no say on what happens at Federal universities located in States” the Governor added.

Zulum, a former student of UNIMAID before becoming a lecturer and acting Dean in the Faculty of Engineering, decried poor conditions of equipments, and facilities which include laboratories and workshops.

The Governor assured the panel of Borno’s commitment to fully participate and render all the necessary support during the period of their assignment.

He urged the management of the university of Maiduguri to work on a development plan.

“As small as my former institution, the Ramat polythechnic, Maiduguri. When I was appointed as the Rector, after taking over the mantle of leadership, the first thing I did was to develop short, medium, and long term strategic plans. I and my team focused on the short term goals.
When we left the polytechnic after three and a half years, we were unable to achieve only one item on the short term plan, which was the rehabilitation of the staff quarters. We were able to rehabilitate all the existing classes, provided additional classes that can provide accommodate students for the next 10 years before we left” Zulum said.

“Your Excellency, we are very proud of you. We know you are interested in the development of Borno State. UNIMAID is the pioneer and leading university in the whole of the region and we will do whatever we can, and I will open to you on our findings at a different platform. So far, we have seen progress” Prof. Hafiz said.

Hafiz said Nigerian laws guiding the establishment of the universities and inter universities stipulates assessment visits are done every five years but the last exercise was carried out early 2011, covering 2004 to 2010.

Professor Hafiz explained that the current exercise will cover a ten-year period and the panel is expected to submit two separate five year reports covering 2011 – 2015 and 2016 – 2020.

The report would aim to identify problems and recommend ways to improve effectiveness and efficiency in the university.

He thanked the Governor for his continued support to  UNIMAID.