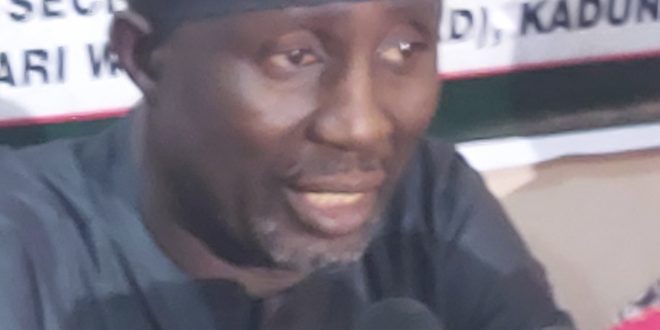 The 2023 standard flag bearer for the governorship election in Kaduna state on the platform of the Labour Party (LP), Hon. Jonathan Asake, has dismissed as mischievous the rumour making the rounds that he is in the race to scuttle the chances of the PDP in order for the APC to win in the state.

Asake said his aspiration to be a governor is not a joke, adding that he is a serious contender for Sir Kashim Ibrahim House and remained highly optimistic to win the election next year.

He stated this on Tuesday in Kaduna when he faced the Political Committee panel of the Southern Kaduna Peoples Union ( SOKAPU), where he was grilled for three hours, according to a press statement by his media aide, James Swam.

“My aspiration to be a governor is not a joke. I am a serious contender for the throne. I want to be governor. When I become governor I will stand and defend the people of the state with all my strength.

“I have heard the strange rumour that I only want to block the PDP for the APC to win. But that is not true. If the PDP truly believed that the zone is theirs why have they not zoned the party’s governorship ticket to the zone since 1999?

” Now that the LP has graciously zoned the office of the governor to the southern senatorial zone, the PDP has suddenly become jittery and they are spreading disinformation.

But I am undeterred by this mischief. I am focused on winning and by the grace of God, I will become the next governor of Kaduna State,” he stated.

Asake noted that as governor, he would
run an inclusive administration where appointments, employments, economic opportunities would be shared based on
equity and fairness.

He stated that he appreciate the diversity of Kaduna state in terms of her different culture, religion and ethnicity, and so better placed to position it for growth and development, haven travelled to the three senatorial zones and the 23 LGAs, districts and villages.