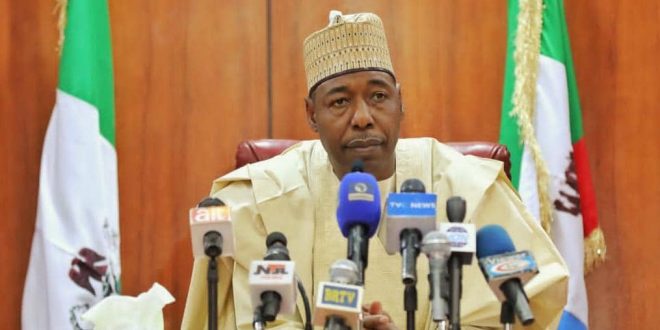 … Says Matawalle is a dedicated Governor
Governor of Borno State and chairman of Northeast Governors forum, Professor Babagana Umara Zulum, was in Gusau, Zamfara State, on Monday on behalf of governors of Adamawa, Bauchi, Gombe, Taraba and Yobe States to show empathy and solidarity over recent attacks on communities by armed bandits.
During the visit, Zulum at the Government House in Gusau, presented a cheque of N20m from the Northeast Governors Forum as support to victims, by way of complementing the efforts of Zamfara State Government towards affected communities.
Zulum was in Zamfara alongside the chairman, Senate Committee on Army, Senator Mohammed Ali Ndume, Chief Whip of the House of Representatives, Barrister Mohammed Tahir Monguno, Deputy Speaker of Borno State House of Assembly, Engr. Abdullahi Musa Askira, and the State Commissioner for Local Government and Emirate Affairs, Sugun Mai Mele.
Addressing the host, Governor Bello Muhammad Matawalle, traditional rulers and top government officials, Professor Zulum said:
“We are here, on behalf of all governors of the six states in the northeast through our forum, to commiserate with the government and good people of Zamfara State over the recent killings that happened in some communities of the state, especially the recent happenings in Anka and Bukuyi. We are here because we have for more than 12 years shared similar experiences and we have to stand by each other at times like these”, Zulum said.
Governor Zulum urged the people of Zamfara not to despair but remain hopeful. He reeled out statistics of huge destructions caused by Boko Haram insurgents in different parts of Borno but noted that despite all of that, peace is now reemerging.
… Says Matawalle is a dedicated governor
Governor Zulum also said from all that he had seen and had been following, Governor Bello Matawalle has shown relentless commitment in the ongoing efforts between the federal and state government to address security challenges in Zamfara State.
“From all that I have reliably heard, Governor Matawalle is sleepless, he is deeply concerned about the situation in his state and we see him running up and down, inspiring public confidence and showing leadership  and insha’Allah, peace will eventually return to Zamfara State” Zulum said in hausa language.
In his response, Governor Muhammad Bello Matawalle expressed profound gratitude to governors of the six northeast states, chaired by visiting Governor Zulum, for their demonstration of love and solidarity to the people of Zamfara State.
“Borno and Zamfara share a similar problem of terrorists’ attacks. We collaborate by sharing ideas in our commitment on how to end these problems we inherited. With our shared commitment, prayer and the support of our people, insha’Allah we shall triumph”, Matawalle stated.
Share