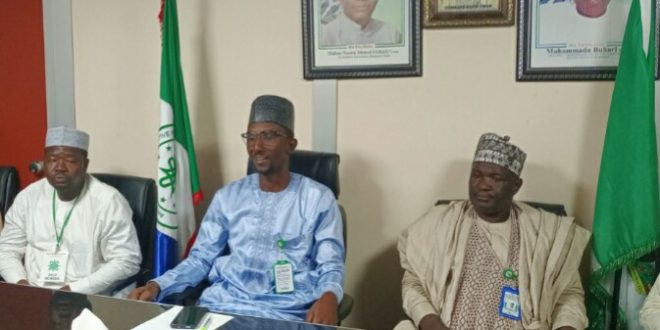 The Arewa Youth Consultative Forum (AYCF), Kaduna State Chapter has called on it fellow members and the general public mostly especially the Arewa youths to be good ambassadors of peace making in whatever situation they find themselves anywhere.

The get-together event, which was held at the AYCF headquarters in Kaduna, was attended by it fellow members from various states which includes Katsina, Kano, Kebbi and other neighboring states as well as some representatives from other southwest region such as Lagos and Ibadan.

Speaking during the occasion, Comrade Sagir Umar, Chairman Kaduna State Chapter, expressed his gratitude for the generosity and love shown by the members for accepting their invitation, and commended the leadership style of the National President Amb. Yerima Shattima, Jarma of Lagos State and Garkuwa of Arewa.

In his statement, the Chairman explained that the office of the Kaduna State Chapter has been in existence for over a decade and that was made possible through one Alhaji Usman Abdullahi, who was part of the main body in Lagos and who is also the present organizing secretary of the Kaduna State forum.

He said: “Any Northerner is a member of this forum except he is not allowed to do anything or speak on behalf of the forum unless the person comes to our office and we have him registered, assessed him, identified him and his guarantor, but that wouldn’t stop us from standing up for someone who has been wronged, even if we don’t know him or he doesn’t care about us as long as we’re aware. ”

“But as long as we prove that a person has committed an act of dishonesty, then we ourselves will hand him over to the authorities for punishment, just as if we were summoned or informed of a person’s wrongdoing. To be honest, we are not going to involve ourselves in it, because we are going to let the authority in charge do their job properly. ”

According to him, the AYCF in Kaduna State has made great strides since its inception, which includes visitation to various government agencies and department to establish synergy among and between the agencies, as well as organized a conference which had over 50 youth organizations in attendance.

Comrade Sagir added that the Sallah get-together gathering was planned to take place in Kaduna as it is now the headquarters of the Association after being relocated from the Southwest region, hence it’s meant to be for the people of the North and not the Southern part as it is used to be despite the fact that it was established in the Southwest region.

“This event is something that we do every year in some regions where we have a strong representation, although it is not an organization that was formed for financial or political gain, but to fight against The freedom, rights and dignity of the people of the North anywhere and everywhere they’re, especially the youth.” He says

Finally, the AYCF members, led by the Chairman of the Kaduna State Chapter, paid a courtesy call visit to the National President of the Forum, Jarma of Lagos State and the Garkuwa of Arewa, Amb. Yarema Shattima at his residence to appreciate him for his tireless efforts and style of leadership that carries all members along in the journey of the struggle.