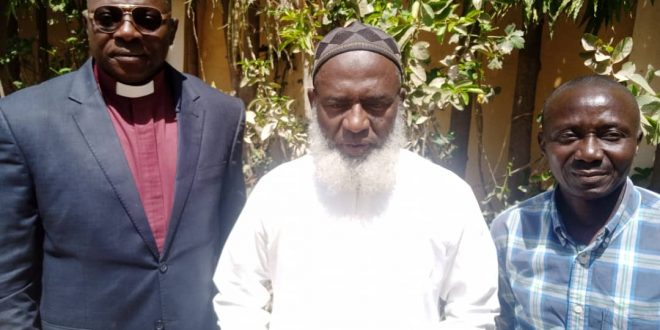 The renowned Muslim cleric , sheick Dr Ahmed  abubakar gumi has  restated the need for continued religion tolerance among  the adherence of different faith base organization across the country,
He made the call  when  he received  Pastor yohanna buru ,the general overseer of christ evangelical and life intervention ministry sabon tasha kaduna state north western Nigeria at his resident
The fire outbreak has destroyed  three laboratories and five class rooms that are located at the Sheikh Gumi’s private residence. 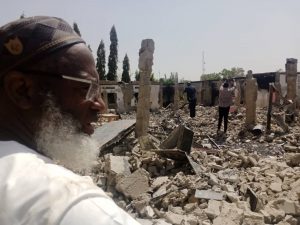 Sheick Gumi who was visibly happy with the visit said,” This  would enhance good relationship between Muslims and Christians across the country , and would equally promote tolerance ,better understanding among different faith base organization”
He urged the followers of the Two major religion to continued  to live in peace and harmony and in support of religious tolerance in order to move the country ahead.
Earlier ,the Visiting pastor, Yohanna buru and other Christians preachers that visited the sheick at his home ,described the mysterious fire incidence as unfortunate ,appealing to sheick Gumi  to take  heart over the incidence .
Buru said,” our Bible tough us mourned with our neighbors when they are mornning, ,also when they are happy ,we should be happy with them “
“we are here to commensurate with sheick gumi and to all muslims all over the world over the fire incidence and pray to almighty God to protect him and the school”
He assured  of continued  support  and prayers for peace,unity and progress of the society.
While appealing to wealthy individuals,corporate organization to help toward rebuilding the school structures
“During our tour to the destroyed building by fire incidence,we have notice that, the many classes of learning were affected,and many study materials were equally destroyed”
“The Christians cleric thank the sheick for given them the opportunity to meet and interact with him which is toward boosting Christians and muslims relationship in the state”
Responding equally pastor zigo jewel of the same church, said we are here as clerics to commensurate with sheick gumi and pray that may God protect the school
He ended up by saying “May god continued to protect him” while calling on wealthy muslims to support him toward rebuilding the school in Good shape
Share