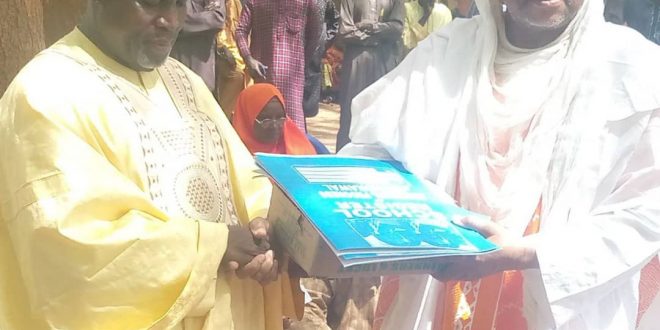 By Muhammad Lawal
Prof. Abdullahi Abubakar-Bagudo, Chairman, Better Education Service Delivery for All (BESDA) in Kebbi State, on Monday appealed to parents at the grassroots to give Girl-Child Education the necessary attention it deserved to facilitate national growth and development.
He made the plea at the distribution of educational materials to schools held at the council secretariat, Kamba, headquarters of Dandi Local Government Area of Kebbi State.
The Chairman said the appeal became imperative in view of the importance of girld-child education to their immediate community, society and the country at large.
Abubakar-Bagudo advised parents at the grassroots to not only enroll their girld-child in schools but also encourage them to study science courses preparatory to becoming health professionals. 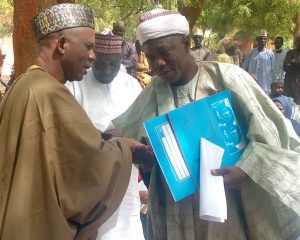 This, according to him, will solve challenges of manpower shortage in health sector apart from addressing issues arising from male medical personnel attending to female in health facilities, adding that “woman can attend to woman at all levels of medication.
“We need female nurses, we need female gynecologists, we need female doctors among others. Remember, we cannot get all these professionals unless we agree to enroll our girl children into formal education to study such courses.
“Most of the time, we are envious of our wives to be attended to by male health personnel but we are refusing to enroll our female folk in schools.
“You won’t be comfortable when you take your wife to a health facility, a male doctor ask you to stay outside while he examine her, hence the need for us to encourage parents to enroll girls in schools to address such challenges,” he pleaded.
He explained that BESDA “is a Federal Government and World Bank project” saddled with the responsibility of revamping education at the basic levels of Primary and Junior Secondary Schools in 17 states of the federation considered educationally backward.
Earlier, Prof. Sama’ila Ahmad, Committee Chairman, Dandi Local Government Education Authority (LGEA), appreciated Prof. Abubakar-Bagudo for finding them (academicians) worthy of heading the education committee at local government levels.
He assured that as his colleagues from Usman Danfodio University, Sokoto, they would neither disappoint him nor the state government, insisting that they would do their best to revive education in the state, especially at basic level.
Ahmad observed that establishing the committee had led to tremandous increase in pupils’ enrollment, attributing successes recorded so far by the committee to support, cooperation and collaborative efforts of district heads and community leaders in the area.
He listed other achievements of the committee to include; visit to all the 103 schools across the local government, introduction of monthly supervisor report from District Education Committies, comprehensive data of all Qur’anic schools and introduction of Education Development Levy among others.
On the contrary, the chairman said the committee faced challenges like; lack of mobility to access rural and riverine areas, lack of qualified teachers, lack of instructional materials, inadequate welfare for teachers and about 26 primary schools had either one or two teachers among others.
The Chairman, Dandi Local Government Council, Alhaji Abdulkadir Mohammed-Kamba, lauded the the committee’s efforts in discharge the legitimate responsibilities vested on it and urged it to sustain the tempo.
In his speech, Alhaji Musa Aliyu-Aljannare, Director, Planning, Research and Statistics, Kebbi State Universal Basic Education Board (SUBEB), stressed the need for people to complement government’s efforts in rescuing the standard of education in the state.
“It is worthy to note that school affairs is actually beyond the efforts of Headmasters, Education Secretaries (ES) and even Government itself, hence the need for collective efforts from all to be able to rescue and revamp the sector.
“It is on record that His Excellency, Sen. Abubakar Atiku Bagudu is doing his best in the area of construction, reconstruction and renovation of schools across the state,” he noted.
Aliyu-Aljannare appreciated BESDA in Kebbi State for playing a vital role in assisting some selected Qur’anic schools with N100,000 each apart form sinking of boreholes in such schools.
Responding, the District Head of Kamba, who is also the Shikon Kamba, Alhaji Mamuda Zarumai thanked the committee for he described as a gigantic effort, assuring that the event was possible following a Levy on truck drivers, NURTW members, rice processors and rice sellers among others.
Share