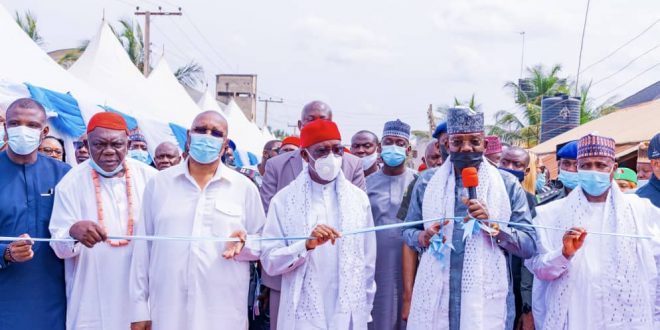 In a statement Signed by YUSUF IDRIS GUSAU
Director General,Media Public Enlightenment and Communications to the Governor made available to journalist. 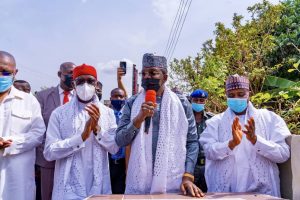 Matawalle was invited to Delta by his counterpart, Governor Okowa for the commissioning.

He commended the foresight of Governor Okowa for inviting him to carryout the exercise noting that the move has demonstrated love and the spirit of brotherliness by the good people of Delta and that Nigerians of all extractions are intrinsically good.

The Shattiman Sakkwato who also said the invitation has demonstrated governor Okowa’s remarkable sense of patriotism and genuine love for a more united Nigeria described his mission to Delta as that of strengthened bridge building that leaders need to appreciate in furtherance of the rich history, cultures and social environment of the disparate entities that formed the Nigerian federation and the fact that our diverse history and culture is a source of our strength.

He congratulated the Deltans for having a Governor whose sole focus is the advancement of Delta State through the provision of critical infrastructure considering the State’s terrain, which comprises mangrove and freshwater swamps where road networks are vital in linking communities together and the deployment of social amenities to the people which according to him are a lifeline for Delta State and other communities with similar terrain in the whole of Niger Delta.

The Zamfara governor who expressed the believe that the road network will open vistas of enormous economic and social opportunities for the benefitting communities thanked his host for the honour and promised to also invite governor Okowa to Zamfara State in no distant time to see for himself some of the modest achievements made by the Matawalle-led administration within the past two years in spite of intractable security challenges.