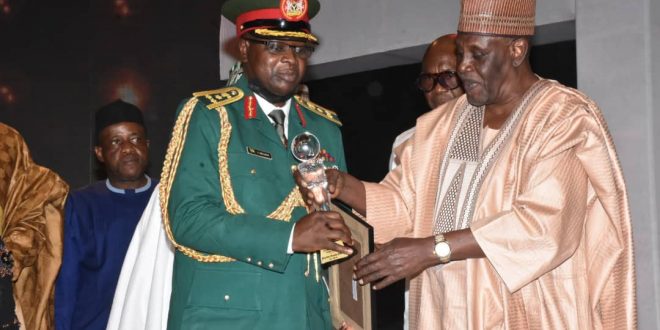 The Sun Publishing Limited, publishers of The Sun newspaper is one of Nigeria’s leading generational news tabloid. Within a short time of its operations, the medium carved a niche for itself in credibility and media excellence in the industry.

Therefore, The Sun Publishing Limited has upped the ante by adding another garland on the shelve of the numerous public service accolades, received by the Director -General, National Youth Service Corps (DG-NYSC), Brigadier General Shuaibu Ibrahim. The 18th Sun awards 2020 honour of Brig. Gen. Ibrahim was a loud reaffirmation of his splendid public service performance. It is Nigeria’s appreciation of a dedicated public servant.

In recent times, the DG-NYSC has been feted by highly reputable corporate bodies and organizations for his marvelous public service records. Brig. Gen. Ibrahim’s nomination by the Board of Editors of the Sun Publishing Ltd and subsequent conferment of the Sun Public Service Award for 2020 is a resounding and distinctive crest of excellence trailing his shadows in public service.

Some Nigerians may be wondering why the DG-NYSC has become a doyen and celebrity in the files of famed organizations in Nigeria. But is it undeniable that the over four decades NYSC scheme has been repositioned, reinvigorated and revolutionized under the leadership of Brig. Gen. Ibrahim despite the turbulent times in the country.He has defined new templates and set new targets for himself, which are religiously implemented.

Brig. Gen. Ibrahim, a crack soldier, military historian and an administrative czar is perpetually scared of failure. So, he strives to excel all the times. He once proclaimed that, “As I sleep and wake up, I think of death and what I will be remembered for and when God gave me this opportunity, I always think of what legacy I will leave behind.”

Propelled by this passion, his execution of the NSYC’s vision for the scheme has placed it on the fast-track of accelerated development; bolstered and renewed enthusiasm in young Nigerians in serving their country and sparked NYSC’s support of national productivity through its agricultural initiatives for corps members. Most significantly, the NYSC is now aggressively pursuing the agenda of morphing into an independent scheme, rather than the total dependence on funding from the FGN.

Thus, it is an accurate verdict to assert that Brig. Gen. Ibrahim has raised internal platforms in the scheme, which are gradually turning the NYSC into an investor, money spinner and active contributor to the focal national policy of the President Muhammadu Buhari’s administration on food security agenda. The NYSC boss also dealt a lethal punch on the nagging menace of dubious participation of graduates with forged certificates in the scheme and fake NYSC members, which were at the verge of completely eroding the credibility of the scheme.

At different times, analysts and public affairs commentators have applauded Brig. Gen. Ibrahim’s perfect initiatives on synergy with multiple agencies and financial institutions. He has his eyes fixated on skills acquisition and financial empowerment of corps members in order to adequately arm them for the post-service challenges of unemployment in the labour market.

The Director- General has enlivened and bolstered conversations and collaboration with critical stakeholders; improved welfare and security of corps members as well as staff. The NYSC boss has also birthed and reengineered a technology-driven scheme which is effectively creating, energizing and reviving the NYSC Ventures and SAED in line with NYSC Act.

At the precarious times of the COVID-19 outbreak, the NYSC boss ensured all orientation camps were secured and there is a laudable testimony that the scheme has not recorded any COVID-19 fatality to this moment. Rather, corps members displayed enviable patriotism in enlisting into their nation’s fight against the pandemic . They produced hand sanitizers’, face masks, embarked on sensitization campaigns on observance of COVID-19 protocols and in some instances, served as emergency health workers where necessary.

And today, the NYSC has invested in massive rice plantations across the country; built or revived Rice and flour Mills, water factories, and allied investments. These are indisputable landmarks which have elevated Brig. Gen. Ibrahim to the status of an exceptional leader deserving of the Sun Public Service award, as echoed by the Managing Director and Editor-in-Chief, Mr. Onuoha Ukeh.

Of course, Brig. Gen. Ibrahim has birthed his biggest project which is in the offing. He is committedly pursuing the initiative of NYSC Trust Fund. It is conceptualized to empower the corps members after post -service years and also, stabilize and sustain the scheme by attracting external revenues to fund its operations.

The DG-NYSC reasoned that “The skills acquisition project has taken many men and women out of the labour market because they become responsive to the challenges of a digital economy. That is why we also want to solicit public support and that of the federal government to set up NYSC Trust Fund. Supported by organizations, it will provide start-up funds for corps members for business and equip the scheme more too. Keeping the corps members busy with the empowerment from the Trust Fund will take many Nigerian youths off the streets and labour market.”

Therefore, the special recognition and award to Brig. Gen. Shuaibu Ibrahim by the Sun newspapers has again trumpeted his finest innate endowments as a soldier and administrator, who has the knack for hard work, commitment to duty and a stickler for excellence wherever he is privileged to render public service. The Sun award is certainly not the last in the public recognition of the assets embodied by Brig. Gen. Ibrahim. When men of ideas, who are endowed with an innovative spirit mount the saddle, the impactful signs become are clear as manifest in the DG-NYSC. May God grant him the strength to drive his initiative of the NYSC Trust Fund to fruition.

Onmeje wrote this piece from the United Kingdom.