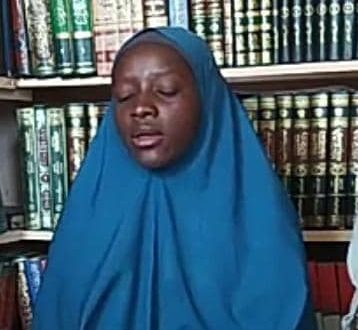 Sumayyah Shu’aibu Salisu is an 18 year old teenager in Zaria who memorized and writes the Holy Quran up head.

Born in Jega, Kebbi state , Sumayyah is the 3rd daughter of Nigerian-Saudi based Sheikh who returned to Nigeria after completing his masters degree at the Madina University in Saudia Arabia, Sheikh Shu’aibu Salisu Zaria.

Speaking to our correspondant in Zaria, Sumayyah Shu’aibu Salisu said ” So far I have written a complete holy Quran with my hand without any guide from anybody or copying from any text in three months. And I am now writing the second, By Allah’s will I would complete it too wthin a month or more.

“Writing the Holy Quran has always been my dream,and I thank Almighty Allah for fulfilling my age-long ambition.

“It took me three months to write the complete Quran despite my academic engagements. You know I am still a student of SS 2 class and I also teaches at Al-Mu’assasa Islah Foundation School in anguwar Dan dutse, tudun wada, Zaria, founded by my father.

Daily Trust reports that Sumayyah who is very fluent and vast in Arabic language was born in Nigeria but started her Islamic education in Madina before returning to Nigeria in 2018.

She has also been acting as Alaramma (reciter of the Holy book) to her father during tafsir especially during the Corona lockdown.

“My next dream is to become a computer scientist and an Islamic scholar.” She revealed.