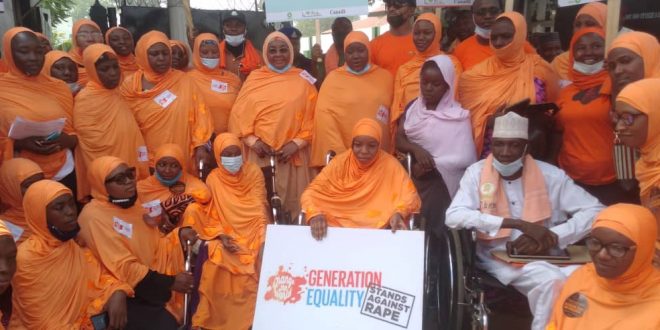 In its remarkable effort towards total commitment to equality and equal opportunities for all women, the Oxfam an international non-governmental organisation was on street walk in the state metropolitan city on campaign to end gender based violence on women and girls.

The Oxfam Lead project manager I Wayne Brooke who was represented by Samuel Lashom the Business Incubation and Rural Finance officer, said that the significance of the street walking is to mark the 16th days of gender activism on what the global world is saying on some of the violence perpetrating against women in the society and world at large.

He added that “today’s event was aimed at saying “No to GBV and No to Genetile Multilation, and also No to all forms of Domestic violence against women”,.

Earlier, the gender focal person Oxfam, Zulai Abdul-Malik said, the ultimate goal of the street walking is to eradicate and kick away gender based violence in the state, Bauchi.

She also disclosed that, the Oxfam concerns more about women on their projects, particularly house wives on how to help them towards supporting their family with businesses opportunities in Agricultural sectors with grants.

On their part, the people with special needs, “disabled groups” also commended the organizers Oxfam for given them a sense of belonging by involving them to participate on the street campaign.

Theme of the year 16 days of gender activism was titled: “Orange the World”.

Other activities during the street walking campaign was displayed of playcards “with inscriptions Stop GBV, Say No to Rape, Say No to Gender Mutilation.

Group pictures of the Oxfam’s family during the street walking campaign in the state metropolitant city, Bauchi.