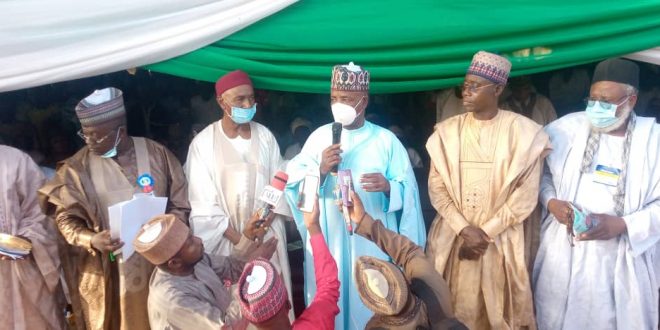 A Member of the House of Representatives, representing Wurno and Rabah Federal Constituency,under the platform of the All Progressives Congress ( APC), Architect Ibrahim Almustapha Aliyu Rabah, has empowered no fewer than one thousand of his constituents with various items, scholarship grants and cash.

The epoch-making event was conducted on Saturday, at Wurno Town, headquarters of Wurno Local Government of the State.

The largesse doled out to the constituents included two vehicles for the Caretaker Chairmen of APC in Wurno and Rabah Local Governments, one hundred pieces each of grinding and sewing machines, fourty vulcanazing machines and fourty wheel chairs and food items.

Others were five hundred students of various tertiary educational institutions who got bursary grants and a free medical outreach for two hundred Indigent patients, among several other interventions.

Speaking at the event, the Leader of the APC on Sokoto State, Senator Aliyu Magatakarda Wamakko, described the day as very historic, just as he commended the lawamker for the invaluable gestures.

Wamakko,who represents Sokoto North Senatorial District also said: ” We should be consitently grateful to the Almighty Allah and appreciate the sustained support of the generality of the people of the state to our causes.

” The event of today is part of the series of its kinds lined up by the APC flagbearers at all levels, to further alleviate the suffering of the people of the state .

” APC aims at assisting the people , rarher than unnecessary squabbles. I must commend all our APC elected and appointed officials, as well as call on them to sustain their tempo of support to the electorate.”

Also speaking, the State Caretaker Of the APC, Alhaji Isa Sadiq Achida, said that, the people of the Federal Constituency have never had it so good like under Senator Wamakko, when he was the Governor of the state, between 2007 and 2015.

Achida also commended Architect Rabah for providing myriad of dividends of democracy to his constituents,from 2019, to date.

” He has followed the footsteps of our APC leaders, especially Senator Wamakko and we are proud of him as he listens and needs to our advice,” the APC Chairman, added.

Also speaking, the donor, Architect Rabah, said that, as loyal sons and students of Wamakko,they have no option than to emulate in terms of ensuring the welfare and comfort of the people .

According to him, the various gestures to the constituents were aimed at further alleviating their suffering, reduce poverty and unemployment, as well as curb restiveness.

Rabah also said that, the bursary for the students was part of his sustained efforts to enable Indigent children acquire eduction,at all levels .

The Caretaker Chairmen of APC in Wurno and Rabah Local Governments, Alhaji Musa Marnona and Alhaji Lawalli Muazu Rarah, commended Architect Rabah for the immeasurable gestures and pledged the judicious use of the items and cash.