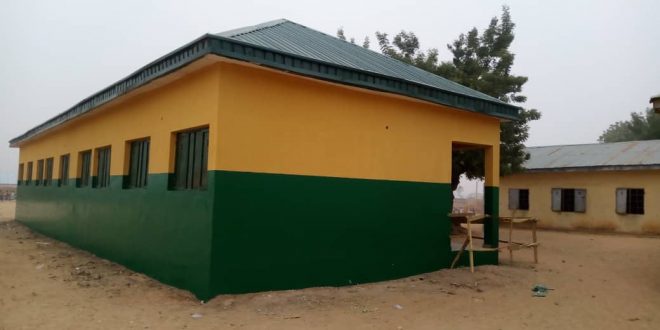 A Member of the House of Representatives from Sokoto State, Architect Ibrahim Almustapha Aliyu Rabah ( APC-Sokoto), has constructed a block of three classrooms at Government Day Secondary School,Rabah, Rabah Local Government of the state.

Rabah, a prominent Local Government, is the birth place of the Political Colossus and Icon, the late Premier of the defunct Northern Region, Sir Ahmadu Bello, Sardaunan Sokoto.

The Member, who represents Wurno and Rabah Federal Constituency, said that, plans were under way to fully furnish the classrooms with adequate, state-of-the-art- assorted furniture.

Almustapha Rabah,while commenting on the gesture said that, it was part of his sustained efforts to complement the efforts of the three tiers of government in funding education.

He also stated that, education is the best legacy that can be bequathed on the youths, who are the future leaders of the country.

According to Rabah, education is also the most potent tool to combat the menace of poverty, unemployment and youths restiveness .

” This gesture is also aimed at encouraging the parents to enrol their children and wards in schools, as well as allow them to complete their studies.

” It will also particularly bolster girl child education and this gesture will continue to be replicated across the Constituency,” the APC MP, averred.

They said that, the invaluable gesture was the first of it’s kind in the area since 1985, when the school was established by the state government.

The duo, who were elated with the project, also noted that, the additional classrooms will help in decogesting the hitherto crowded ones, to be in tune with extant UNESCO standard.

They also appealed to other wealthy individuals , as well as elected and appointed officials to emulate the gesture by Architect Ibrahim Almustapha Aliyu Rabah.

Meanwhile, the first phase of the free Medical Outreach sponsored by the MP had been successfully completed, with one hundred Indigent patients from Rabah and Wurno Local Governments benefitting.

The APC Caretaker Chairman in Rabah Local Government, Alhaji Lawalli Muazu Rabah, said that , fifty persons each from the two local governments were successfully operated upon, while they had since been discharged from the hospitals.

The Chairman said that , the common ailments of the beneficiaries were hernia and appendix, while free drugs were also given to them.

He further said that, the gesture had alleviated the suffering of the beneficiaries who were hitherto bogued down by the debilitating ailments.