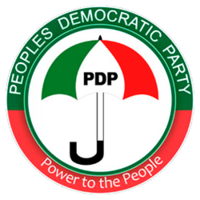 FROM IMRANA ABDULLAHI KADUNA
In a statement Signed by the Publicity secretary  Abba Bello Oando that available to journalists revealed that, what happened is sad incident because is an act of lawlessness where some unknown youth suspected to be sponsored political thugs, numbering about 300 stormed the venue of PDP Congress and Vandalized property worth millions of naira.
The statement reads that “The dastardly act is condemnable by all standards and unacceptable especially in a  civilized society like ours, where the freedom of speech and association are sacrosanct and guaranteed by our noble constitution of the Federal Republic of Nigeria”.
The publicity secretary said “if the political bitterness in Zamfara state left unchecked by the relevant authorities particularly security Agencies it could snowball into a serious security threat that will worsen our fragile peace, and be costly in terms of human lives and property”.
We, PDP members are law-abiding citizens as we have duly notified the relevant Security Agencies of our planned state congress.  Thereafter, we provided Chairs and Canopies and decorated the venue, which means we are ever ready for the august function, but a few hours to the commencement of the event, a group of suspected political thugs, in their numbers, arrived at the venue wielding dangerous weapons and set the place ablaze.
“In addition to vandalizing some vehicles parked at the premises of the venue,  Thank God that no life was lost”
The people if Zamfara State are aware of the heavy presence of the operatives of various Security Agencies in Gusau town, monitoring the prevailing security situation, yet none of the perpetrators was arrested.
While, “the ruling All Progressives Congress (APC) has recently concluded similar Congresses at the Wards, Local Government and State Levels, without recording any security breach”, the statement added.
Let me emphatically assure the sponsors of the Monday arson that the PDP supporters, as well as the good people of Zamfara State, will continue to remain focused and committed to winning election at all levels come 2023 by the special grace of Almighty Allah (SWT) for our collective good.  No amount of distraction will deter us from bringing about a positive change in Zamfara and the country at large in this direction.
PDP started that with due respect that the Security Agencies  are highly anticipated to remain neutral and unbiased in the discharge of their constitutional responsibilities.
Added that they are going to use all constitutional means to seek redress for the damages inflicted on us.
Share