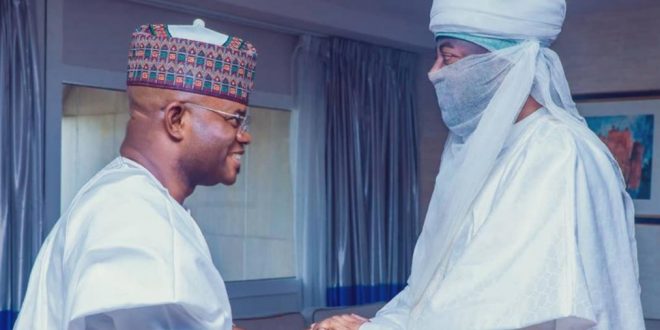 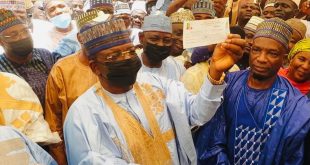 GOVERNOR MATAWALLE OFFICIALLY REGISTERS AS MEMBER OF THE APC

The security initiatives of Governor Yahaya Bello of Kogi State has received a boost when the Emir of Kano, Dr Aminu Ado Bayero applauded the kogi state government for her watertight strategies against insecurity in the state.  The Emir charged the governor to sustain his onslaught against criminal elements in his state.

In a statement Signes by Onogu Muhammed
CPS to Governor Yahaha Bello of kogi state, and made available to journalist revealed that.

The Royal Father emphasized that no society develops in the absence of peace, as peace is the foundation of every societal growth, adding that one segment of the society is in turmoil, all others are ultimately opened to inherent dangers and resultant effects He stressed the need for everyone to be fully involved in the fight against insecurity.

The governor who met with the Emir in Abuja appreciated him for recognizing his effort in the fight against insecurity and also acknowledging the development strides recorded under his administration.

Governor Bello noted that before he assumed office, the Confluence state was hitherto of the kidnap capital of Nigeria where dreaded kidnappers and other criminal elements reigned with impunity. His administration, and he however, changed the situation as kogi state is now a safe haven for citizens and prospective investors within and outside Nigeria.

While thanked the Monach for his continued support for leaders in position of authority urged him to continue to leave his door open for young leaders and followers who come to tap from his wisdom.