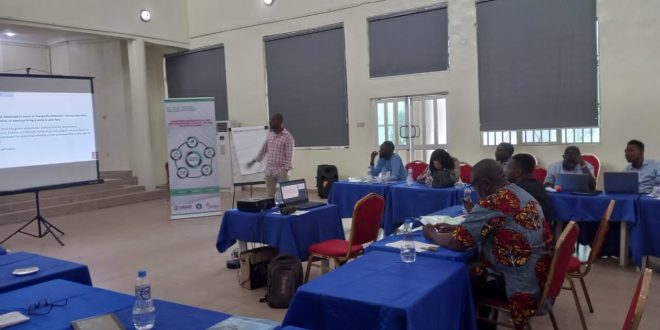 The National Agency for the Prohibition of Trafficking in Person(NAPTIP) has urged stakeholders to brace up the drive against trafficking in person, cautioning potential victims not to get brain-washed by traffickers as ‘gold’ are not found in the streets of Europe.

It urged stakeholders particularly states to fast track measures at domesticating anti human trafficking laws to further strengthen commitment by supporting the agency to drive its operational mandate of putting a stop to it as well rescuing and protecting victims of the menace.

” We need to fast track the implementation of legal, institutional & policy framework that would strengthen the operational capacity of critical players and organs against trafficking in person.”

The Benin Zonal Commander of the agency, Mr. Nduka Nwanwenne stated at a three day USAID training programme in the Edo state capital for media practitioners organised through Palladium and facilitated by Network Against Child Trafficking, Abuse and Labour(NACTAL) towards countering trafficking in person.

Nwanwenne decried why Nigeria occupied the status of a transit and destination points for victims of human trafficking.

He noted that women and children were more vulnerable targets of traffickers now evolving various methods to get maximum returns from exploitation of their victims.

” Our investigations reveal that traffickers now device the use of social media platforms to drive fake recruitments towards getting their victims “, the Commander said.

Though, Nwanwenne who is also a member of the Edo state Task Force against human trafficking noted that no country was immune of the menace adding that” all parts of the country are affected only that the menace is more endemic in Edo and Delta states.

” It is a source of concern. We evacuated about 104 victims from Mali out of which 50 were from Edo and 30 from Delta and the remaining from other parts of Nigeria.

” Mali has the highest rate of trafficked victims”, he pointed out.

He disclosed that no fewer than 5 convictions were secured by the command under the Edo state law on human trafficking in collaboration with key players.

” Most convictions were on sexual exploitation of victims”, he said.

He said the media remain an umbrella partner in fostering synergy among major players through reportage and records against trafficking in person.

Earlier, Mr. Samuel Olayemi, Project Manager of NACTAL said the essence of the drive was to strengthen collaboration, capacity of and brace responsive advocacy among critical stakeholders on CTIP in Nigeria.

Olayemi disclosed that NACTAL Nigeria had registered its presence across 9 states including the FCT to drive its components on trafficking.

” Our goal is to improve and facilitate coordination and implementation capacity of CSOs other stakeholders on CTIP in Nigeria”, he stated.